Update: This word was added in January 2021.

The word Jedi first and foremost refers to the fictional order of mystical warriors who harness the Force—that all-pervasive spiritual essence that holds in balance the forces of good and evil—and battle their way through the Star Wars movies, light sabers flashing impressively along the way. 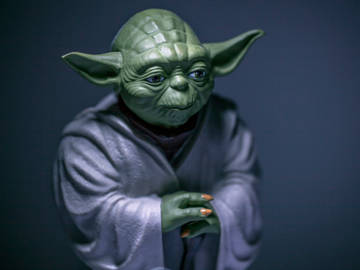 These days, 'Jedi' is often used to refer to anyone who is exceptionally skilled at something.

But while the Jedi Knights (as they are also called) lived a long time ago in a galaxy far, far away, the word Jedi (also styled lowercase: jedi) lives right here and now. And it's been busy lately:

And Schreiber grounds the movie, showing Baron as a newsroom Jedi, an outsider who sees what the homegrown Bostonians missed.
— Sean P. Means, The Salt Lake Tribune, 17 Feb. 2016

Scout your lines during the 4,139-vertical-foot ascent on Jackson’s beloved aerial tram before emerging into a playground of narrow chutes, open bowls and glades so tight they require Jedi navigation powers.
— Rachel Walker, The Washington Post, 2 Dec. 2015

That's right: the word Jedi doesn't always imply long robes and a concentrated glare. Sometimes it just refers to a person who is exceptionally skilled at something.

The non-cinematic sense of the word is also frequently seen in the phrase "Jedi mind trick":

So how do you hold on to your Zen when your husband's in a bad mood? Leave him alone…. To get him to sync with you (and not you with him), just sit back and let your good vibes work a Jedi mind trick on him.
— Redbook, February 2011

Plenty of critics have suggestions for how to solve discrimination and bias on Airbnb’s network. Some claim that removing photos is one easy, tangible move…. And removing names and photos altogether, as some have suggested, isn’t necessarily an ideal solution, either. “It’s better to prepare people to tackle their biases,” says Alexis McGill Johnson of the nonprofit Perception Institute, “as opposed to doing Jedi mind tricks.”
— Aura Bogado, The Grist (grist.org), 13 Dec. 2016

Such use of the word Jedi isn't new, but decades ago it was used in contexts that more often clearly evoked images of the original Jedi:

Is it any wonder so many software developers fancy themselves Jedi knights, slaying corporate enemies left and right? Coders need to fantasize to keep their spirits up. After all, their work, which demands the manipulation of abstract symbols for long hours in isolation, can cause the body to atrophy and the mind to curdle.
— Scott Rosenberg, The New York Times Book Review, 13 Feb. 2000

"I like to call them my Jedi Knights," says Chief Shipman of the men and women who serve under him, and he's only half kidding. Going into the dragon's throat: that's what firefighters call moving into battle with red, roaring, ripsnorting fire.
— Jennifer Lee Carrell, Smithsonian, May 1999

The variable nozzle adjusts the pre-set water pressure from low to high and the spray angle from fan to pencil point. On high-pressure pencil point, you'll feel like the Jedi warrior of all car washers.
— Slaton L. White, Field and Stream, December 1992

As for the origins of the word Jedi—and of the Jedi themselves—apparently they're also of this world, albeit from a part at a considerable distance from Hollywood:

[George] Lucas did not only source a significant part of his Star Wars’ storyline from [Akira] Kurosawa’s flicks, but also borrowed ideas for the swashbuckling light sabre scenes by Jedis wearing long Japanese Buddhist monk-influenced robes and cloaks. The term “Jedi” itself came from the Japanese “jidai-geki” meaning period drama, while super-nasty Darth Vader’s costume and helmet were inspired by Japanese warlords’ uniform and headwear.
— Peter Lyon, Forbes, 29 June 2016