The word other has numerous senses in the dictionary. It's most familiar as an adjective: "being the one (as of two or more) remaining or not included," as in "held on with one hand and waved with the other one". 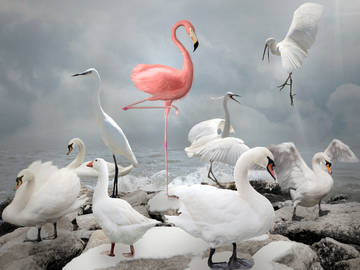 'Other', which we enter as an adjective, a noun, a pronoun,and an adverb, is increasingly being used as a verb meaning "to treat that culture as fundamentally different from another class of individuals, often by emphasizing its apartness."

Another sense of the adjective expands on this idea of apartness: "disturbing or threateningly different : ALIEN, EXOTIC," as in:

The belief that animals are so other as to be gods, on the other hand, gives yet another swing to the pendulum, and produces a reason to eat such animals after all—to eat them ritually.
Wendy Doniger O'Flaherty, Other Peoples' Myths, 1995

As discussions surrounding diversity and inclusiveness become more prevalent in our political discourse, we are becoming familiar with a different use of other, that as a verb:

You go in and don't have to go some dark, scary corner for the plus-size section. It can make you feel like you're not being othered and dehumanized.
Amanda Levitt, quoted in Detroit Free Press, 2 Nov. 2016

He later amended that specific law, but that didn’t take away from his long record of othering the [gay] community, such as in 2006 when he said gay coupling would cause “societal collapse.”
Todd Van Luling, The Huffington Post, 5 Oct. 2016

Immigration has been a hot-button topic throughout this election cycle, and an unfair portrayal of the immigrants in the country has surfaced. They have even been othered by some candidates, which is unfair considering they are a vital part of this nation we all call home.
Angelica Lawson, Iowa State Daily, 19 Oct. 2016

The use of other as a verb is rooted in sociology: to other a certain culture or individual is to treat that culture as fundamentally different from another class of individuals, often by emphasizing its apartness in traits that differ from one's own. The idea of othering, as sociologist Yiannis Gabriel describes it, is evident in the use of the term barbarian to refer to a foreign culture; Gabriel posits that "it may be initiated by an encounter between civilizations that have no previous tradition of contact or understanding."

Othering can be as simple as speaking of a group of people as "them" in relation to another's "us," or even putting the definite article the in front of a label, as linguist Lynne Murphy writes in Quartz:

“The” makes the group seem like it’s a large, uniform mass, rather than a diverse group of individuals. This is the key to “othering:” treating people from another group as less human than one’s own group. The Nazis did it when they talked about die Juden (“the Jews”). Homophobes do it when they talk about “the gays.” In my research on British and American cultural relations, I’ve found that British writers’ views on American English are a good predictor of whether they’ll write “Americans say it that way” or “The Americans say it that way.” Those who feel that American English threatens British English use “the” to hold Americans at arm’s length (possibly while holding their noses).

Targets of othering can range from race to gender to sexuality to regional accents to hair color. It's the notion behind a term like black sheep ("a disfavored or disreputable member of a group"), which only makes sense when one thinks of sheep with white fleece as the only normal kind.