The Scoop on 'The Proof Is in the Pudding'

No evidence is in there, but it was a treat to find out.

Have you ever stopped mid-pudding to wonder how it might have some "proof" in it, as suggested by the expression "the proof is in the pudding"?

I'm making music with my friends, and it just so happens that the three of us are the next generation of the Allman Brothers Band. But at the end of the day, the proof is in the pudding, and the pudding is that record. Once the world hears that record, they'll realize we really have our own thing going on.
— Devon Allman, quoted in The St. Louis Post-Dispatch, 21 Dec. 2018 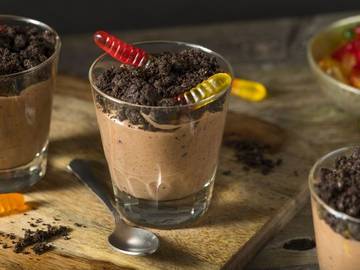 Okay, so this one has more gummy worms than proof in it...

Yes, it's an odd question: can a pudding eater find some sort of evidence in his or her serving of pudding that testifies to the character of something else other than the pudding? And what exactly is this "pudding"?

The proof of the pudding is in the tasting. The art must be viewed to be appreciated.
— Victoria Horsford, Our Time Press (Brooklyn, New York), 8 Nov. 2018

The proof of the pudding is in television ratings, which are up nearly 40 per cent on last year.
— Liz Ellis, The Age (Melbourne, Australia), 9 Aug. 2018

Generally, the expressions are used to say that the real worth, success, or effectiveness of something can only be determined by putting it to the test by trying or using it, appearances and promises aside—just as the best test of a pudding is to eat it.

Proof in the expressions developed from an alteration of Middle English prove, which itself is from Anglo-French preove, meaning "evidence," based on an Old French word meaning "test." Both meanings are shared by its Latin ancestor probare, which is also the root of English probation. In Middle English, proof had meanings relating to both the presenting of evidence that demonstrates a truth and the establishment of fact or truth through testing.

Madam, you may make proof of him, and if your ladyship find him too saucy or wasteful, you may return him whence you had him.
— James Howell, letter, 2 June 1630

Today, the "test" connotation of proof is extant in the measurements of how much alcohol is in a liquor (e.g., "80 proof whiskey") and is evident in words relating to tests of strength, such as fireproof, bulletproof, foolproof, as well as quality—for instance, proofread.

The saying "the proof of the pudding is in the eating" is first recorded in English in the early 17th century, but it is likely much older. Phrases for the notion that to taste something is to test it go back to, at least, the 14th century. But back then, no one was talking about the kind of sweet, creamy "pudding" confections we now get mostly from boxed mixes or pull-top snack containers. Puddings were gutsy (literally)! They were essentially sausages—usually mixtures of minced meat, cereal, spices, and often blood, stuffed into intestines or stomachs, and boiled or steamed. In the Middle Ages, they could be very good or very bad—or possibly fatal if the meat used was contaminated. But to find out, you had to put it to the "proof."

Such medieval puddings were held in high esteem. The eminent 18th-century literary figure Samuel Johnson saw fit to commend his friend, the poet and translator Elizabeth Carter, thus: "[she] could make a pudding as well as translate Epictetus from Greek...." Add to that the concealed nature of pudding ingredients—whether in a blood pudding (aka, blood sausage) or one of the traditional sweet puddings full of dried fruit and nuts and enclosed in a dumpling crust—and the logic behind the original expression becomes far less mysterious.

Examples of the expressions are found in works by such notables as Jonathan Swift, Alexander Hamilton, and Joseph Addison, and they still remain popular today. Although the modern truncations don't make literal sense, they all are tasty. The proof of the pudding is in trying them out in your everyday convos.