One ‘Bad Apple’ Can Spoil a Metaphor

The history of a rogue phrase

We define bad apple as "someone who creates problems or causes trouble for others; specifically, a member of a group whose behavior negatively affects the remainder of the group." This term is often misunderstood to mean that a troublemaker's behavior is not representative of the whole group, but the proverb this term originally comes from is "one bad apple spoils the whole barrel." 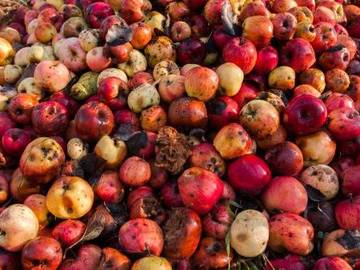 In May 2020, in light of protests across the country following the deaths of George Floyd and other Black Americans at the hands of police, White House National Security Adviser Robert O’Brien spoke on CNN’s State of the Union and said:

Some commentators pointed out that O’Brien seemed to get his metaphor backwards. His intention, by labeling racist police officers bad apples, was to say that such officers are not representative of police departments as a whole, and that an individual’s corrupt behavior can be isolated from the system in which that individual operates. But the proverb to which O’Brien alluded actually suggests the opposite: “one bad apple spoils the whole barrel.”

Bad apple (or rotten apple) is indeed defined as “someone who creates problems or causes trouble for others; specifically : a member of a group whose behavior reflects poorly on or negatively affects or influences the remainder of the group.”

Versions of the proverb can be found as far back as the early 16th century. In “The Cook’s Tale” from Geoffrey Chaucer’s Canterbury Tales, an apprentice chef named Perkin is asked to be let go from servitude on the rationale that his habits of drinking, vice, and debauchery will rub off on his colleagues.

Than that it rotie al the remenaunt.

(“Well better is a rotten apple out of the store

Than that it rot all the remnant.") … It is ful lasse harm to lete hym pace,

Than he shende alle the servantz in the place.

(It is much less harm to let him go away,

Than that he should ruin all the servants in the place.”)

In Poor Richard’s Almanack, Benjamin Franklin worded the saying as “The rotten Apple spoils his Companion.” The choice of the personal pronoun makes quite clear that Poor Richard is not talking strictly about fruit. The saying turned up frequently in 19th-century sermons as a warning to stay away from sinners because they tended to be corrupting influences.

As The New Yorker’s Helen Rosner writes, the proverb is supported by the actual science of how apples decay:

Blight spreads quickly, and it’s not always apparent on the fruit’s surface. Even without the influence of invader or infection, an apple abets its own spoilage: its skin, minutely porous, exhales ethylene, a gaseous compound that induces ripening, and the fruit has no interest in stopping at the point where it serves our needs.
— Helen Rosner, The New Yorker, 8 June 2020

Misuse of the Proverb

O’Brien is far from the first person to get the expression wrong. In fact, many speakers have made use of the proverb to express the same idea—that rotten behavior by a member of a group can be considered in isolation and not be viewed as typical for that group.

Bad apple was invoked regularly in 2004 by media and public figures as part of the dialogue surrounding the George W. Bush Administration’s response to accusations of torture of prisoners imposed by American soldiers at Abu Ghraib.

A senior U.S. official said Thursday that Sanchez was surprised by the severity of the abuses and the apparent lack of response by the military police unit's officers.

"The outrage was over the photographs, because the photographs were living color of what those top-secret memorandums authorized," [Retired Army Col. Janis] Karpinski said in an interview Wednesday. "So, it is unfair ... the soldiers may have moved through [the military justice] system, but they never had a fair court-martial. Not any one of them, because they were condemned as one of the 'bad apples.' " Karpinski, then a brigadier general and commander of Abu Ghraib, was demoted to colonel because of the scandal. A second officer, Col. Thomas Pappas, the commander of the military intelligence unit assigned to Abu Ghraib when the offenses occurred, was relieved of duty and fined in May 2005. Seven low-ranking guards and two military intelligence soldiers -- described by then-Deputy Secretary of Defense Paul Wolfowitz as "bad apples" -- were disciplined.
— Samira Simone, CNN.com, 22 Apr. 2009

In a wide-ranging speech, Mr. Gore also spoke of the abuse of Iraqi prisoners at the Abu Ghraib prison outside Baghdad, which he said was not the work "of a few bad apples," as the nation had been assured by Mr. Bush. The incidents, he said, had caused damage not only to America's strategic interests but "also to America's spirit." The prison abuse did not "spring from a few twisted minds at the lowest ranks of our military enlisted personnel," Mr. Gore said. "No, it came from twisted values and atrocious policies at the highest levels of our government," he said. "This was done in our name, by our leaders."
— Terence Neilan, The New York Times, 26 May 2004

Well, I think that everyone understands that you have mistakes, that you might have bad apples in a great big barrel. But I also think that how we react, what we do now, and what steps are taken to assure the world that we would never tolerate this kind of behavior, that we have a Pat Tillman out there who gives up a lot to just enlist and become a part of our army, is the kind of person that we believe Americans are, and that we want to portray to the world.
— Kay Bailey Hutchison, transcript, CNBC, 4 May 2004

The administration began by dismissing the misconduct at Abu Ghraib as the work of what President Bush called "a few American troops." The bad-apple defense quickly crumbled, though, with the leak of government memorandums authorizing the use of "enhanced interrogation techniques."
— Jonathan Mahler, The New York Times Book Review, 29 July 2007

Even before Abu Ghraib, English speakers were making their own conclusions about figurative fruit rotting tendencies. Bad apple and rotten apple commonly arise in discussions of police misconduct and police departments, sometimes with the metaphor understood and sometimes not:

He [Deion Sanders] also said he had no hard feelings toward police. "One bad apple doesn't spoil the whole bunch," he said, referring to Herb Kohus, an off-duty police officer who was working as a security guard at Riverfront Stadium and got into an argument with Sanders that led to the charges.
— Associated Press, 25 May 1995

City government spin doctors are trying to depict the police department's problems as a matter of insufficient budgets and a few bad apples. Meanwhile, many nervous citizens are calling for a federal takeover of the cops.
— Carl T. Rowan Jr., The New Republic, 19 Jan. 1998

"I think the citizens of Baltimore are outraged," said [William H.] Murphy [Jr.]. "We need the police very badly. We wish them well. ... But we resent deeply how they police in the black community. "I'm not indicting all the police," he said. "It only takes a few rotten apples to spoil the barrel. But this is more than a few rotten apples. This is an institutional pattern of long standing."
— Sumathi Reddy, The Baltimore Sun, 1 Aug. 2006

Popular culture might have played a role in spreading confusion about the metaphor. In 1970, the Osmonds recorded their hit “One Bad Apple,” with its catchy refrain phrased in the negative (and improper subject-verb agreement to boot): “One bad apple don’t spoil the whole bunch, girl.” The song hit No. 1 on the Billboard Hot 100 and stayed there for five weeks. The lyrics to “One Bad Apple,” addressed to a female listener, use the bad-apple metaphor to argue that because one previous male object of her affection broke her heart, she shouldn’t give up on all men (“Oh, give it one more try / Before you give up on love”).

It might seem a stretch to draw the line from a teenybopper earworm to torture in an Iraqi prison to playing down the rogue actions of police officers, but we wouldn’t put anything past the Osmonds.

MORE TO EXPLORE: 'Metaphor' vs. 'Simile'