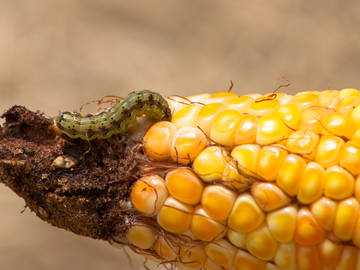 'Earworm' is centuries old in English, but the word first referred to the earwig; later, it referred to a destructive pest known to infest ears of corn. Meanwhile, Germans started using the parallel word 'Ohrwurm' to refer to an infectious tune.

Those songs are called earworms. The name for the catchy tune is apt: the word itself sounds wriggly and unappealing. This particular earworm is an English translation of the German name for the tunes—Ohrwurm. Those Germans, you think. They have the best words.

There is no denying this, but in this particular case, the English earworm is not entirely a translation of the German Ohrwurm. The two have a long and intertwined history.

The English word is actually centuries old and was another name for the earwig, which got its name from the belief (happily, very wrong) that they crawled into people's ears. Hence, earworm. This belief was widespread and old: it shows up in English over 1,000 years ago, and we know that the belief was all over the European continent by looking at other languages' names for this creature. Danish, Swedish, medieval Dutch, medieval Latin, medieval French—all of the names for the earwig in these languages refer to the ear. German, too: the earwig is called an Ohrwurm.

Our use of earworm to refer to the earwig began to fade in the 19th century, when the word earworm in English began to be used of a destructive moth larva which bored into the ears of corn (and also destroyed tomatoes, tobacco, and cotton bolls). The earworm flourished as an agricultural pest, and this was the primary meaning of the English earworm through the 1800s and 1900s.

Meanwhile, in Germany, the parallel term Ohrwurm still referred to the earwig, but in the late 1950s and early 1960s, those inventive Germans began applying the name for this pest which supposedly burrowed into your ear to a piece of music that wouldn't get out of your head.

We English speakers stumbled across this German use in the early 1980s and we fell in love with it. We took the meaning of Ohrwurm and applied it to the English word that matched the German one word for word: earworm. Though this use of earworm first showed up in English in the early 1980s, it was popularized by Stephen King:

A couple of months ago, I woke up at three in the morning, thirsty as hell (probably because I’d donated blood the day before), and shambled into the bathroom for a glass of water. I was 20 percent awake at best. And as I turned on the faucet, I realized I was singing this: "They say a man should always dress/For the job he wants/So why’m I dressed up like a pirate/In this restaurant?"
Dear God, I thought, I’ve been infected by an earworm.
My friend the Longhair says that’s what you call songs that burrow into your head and commence chewing your brains. The dreaded earworm can turn even a great song into something you’d run from, screaming at the top of your lungs. If only you could.
—Stephen King, EW.com, 17 April 2009