Update: we have been informed that not everyone agrees with that statement. How about...

Everything (in this article) is (about the word) awesome! Better? 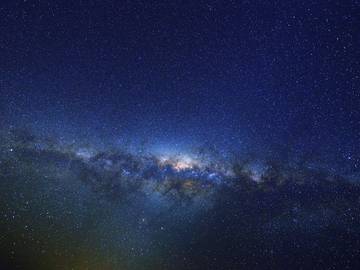 Everything is cool when you're part of a team, though.

It has also come to our attention that some out there object to the use of this word in a manner not directly related to the sublime.

In my day, the word “Awesome" was reserved for things like curing Polio and walking on the Moon, not for food or TV shows.

We understand such pique in this matter. But we also must point out, to the many who are bothered by the broadened meaning of awesome, that we are a descriptivist dictionary. When confronted with evidence of widespread and specific semantic use, we are compelled to make note of it and proceed accordingly. Although we do define awesome as both “inspiring awe” and “expressive of awe,” we also offer a definition for the word’s informal use: “terrific, extraordinary.” We do so because there are numerous examples of people, many of whom are quite educated, using awesome in that exact way.

Of course in the 1998 film Armageddon, the asteroid chunks had awesome aim, hitting **all** the great cities of the world.

Awesome isn't the only controversial word in the awe family. Hester Lynch Piozzi, writing in 1794, said of the word awful that it “should however be used with caution, and a due sense of its importance; I have heard even well-bred ladies now and then attribute that term too lightly in their common conversation…” Where it once was used to mean "full of awe," awful is now primarily bandied about as a simple synonym for objectionable or bad.

Neil has one answer: “Science literacy, just as a state of mind, is quite the vaccine against those who speak in pseudoscientific ways…the human brain is awful at interpreting what it experiences…
— Neil deGrasse Tyson (quoted), Neil degrasse Tyson & Jeffrey Simons, StarTalk, 2016

Not content with just awesome and awful, the English-speaking people have also roughed up the adverb awfully, adding to the initial meaning (“in a manner that inspires awe”) one with the pedestrian function of a mere intensifier (“exceedingly, extremely, very”).

I pressed the call button, handed the neatly folded lesson plan to the flight attendant, and said, “Please deliver this message to the pilot.” I can’t explain why, but that was awfully fun to say.
— Neil deGrasse Tyson, The Sky is Not the Limit, 2004

What is it about awe that inspires so much semantic drift? Perhaps that's a question best left to the philosophers. But getting back to lexicography, are there any related words that still retain their earlier, grander connotations? Sure there are: awesome still has the “inspiring awe” meaning, and in spite of the fact that people use it as a variant of groovy, it remains appropriate for the work of both Jonas Salk and Buzz Aldrin.

In addition to our descriptivist mission we also seek to provide historical information on the uses of a word. So we'd be remiss if we didn't mention that the earliest meaning of awe was “intense fear,” which wouldn't really be apropos for most of the things mentioned in this article. Though it is conceivable that a 13th-century crowd would run screaming from footage of a moon walk. That would be pretty awesome to see.