Of 'Nunchucks' And Nuns

Sometimes a word really, really does not equal the sum of its parts

One of the common misconceptions occasionally held by amateur etymologists is the idea that one might sit down and stare at a word for a good long while, and by dint of thoughtfulness and a certain amount of daring, come up with a reasonable explanation for its origin. That’s not how etymology usually works. 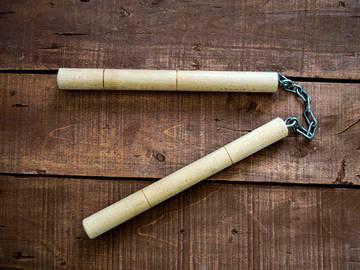 For an example of why this sort of approach is not the most efficacious, we may look to the recent introduction into English of the word nunchuck. This word, which is defined as “a weapon that consists of two usually hardwood sticks joined at their ends by a short length of rawhide, cord, or chain,” came into our language in the late 1960s, and has very little to do with chucking and even less to do with nuns.

Nunchuck is a variant of a word from the Japanese dialect of Okinawa, nunchaku, which itself may come from a Taiwanese word for a kind of farming tool, neng-cak. Nunchaku began to be used in English in the early 1960s, initially applied to a style of martial arts, and shortly after to the particular weapon employed in that style.

Hanke introduced him to the nunchaku, a fighting stick which Okinawans devised from a much longer rice-threshing tool.
—Don Lenhausen, Detroit Free Press, 2 Feb. 1969

Protect Yourself From Assault. For women of all ages, especially if living alone. The incredible “nunchaku” is the best non-lethal handweapon that even very old and very young can use. Works for you when fears are aroused.
—The Los Angeles Times (advt.), 7 Dec. 1969

It did not take long before English speakers began coming up with variant ways of saying nunchaku; by the end of the decade, both nun chuck and nunchuck could be found. Oddly enough, the earliest citations for these two spellings (that we've found) come from reports on the Jewish Defense League (although it should be noted that is not sufficient evidence to claim that the JDL is responsible for the current spelling of nunchuck).

The JDL patrols don’t wear uniforms; their only badge of identification is a blue beret. And their weaponry consists of a motley collection of bats, two-handed flails called nunchucks and a varying mastery of karate.
—Wade Greene, Journal Gazette (Mattoon, IL), 28 Feb. 1970

Many of the early printed mentions of nunchucks tended to characterize them as potentially deadly weapons, although in subsequent decades there have not been any reports of significant fatalities from their use.

Nun-chucks consist of two 10-inch-long sticks about an inch each in diameter which are connected by one end by a pair of cord thongs. Wielded by an individual schooled in their use they are capable of inflicting death with a single blow.
—Delaware County Daily Times (Chester, PA), 9 Mar. 1973

Consider this your reminder that even though butterfly does indeed come from joining butter and flies, this does not mean that you can then apply the same principles of scholarship to other words which appear to have been formed by combining words. If you're a fiction writer, however, connecting the origin of nunchucks to nuns could lead to an intriguing story.