Its recent usage is hard to shrug off.

Prefixes are treacherous little beasts. Just when you think you've come to an understanding, prefixes such as in- will come along and carry meanings such as “not,” “in, within,” “into,” “toward,” or “put into or onto.” And to make things worse, some of the beginnings of words which appear to be prefixes aren’t prefixes at all, even if they seem to function in the same manner.

Why are we bringing this up? Well, we didn’t want to tell you in this way, but we didn’t want you to hear it from someone else, either. There’s a new sense of nonplussed that people have been using, and…well, we’d just like to give you fair warning in case our descriptivist nature causes us to take action. This new sense appears to stem from a mistaken belief that the first three letters of nonplus are there to indicate that someone is something other than “plussed” (although what being plussed would entail here remains a mystery). 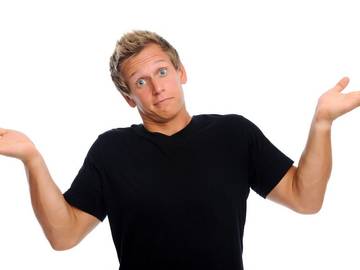 Is he perplexed, or is he unconcerned? We'll never know.

It’s somewhat questionable whether the non in nonplus is actually a prefix at all; the word came into English in the 16th century, and was taken from the Latin non plus, which means “no more.” When it first appeared in our language it was used as a noun, with the meaning of “quandary.”

This was then, and is now, the answere to that friuolous obiection, and this is the Nonplus that the Libeller vaunteth of.
—Thomas Cooper, An Admonition to the People of England, 1589

I am brought to a nonplus, O Lorde what shall I saie?
—Edward Hutchins, Davids Sling Against Great Goliath, 1593

So that now we are much beholding to M. Deacon, and M. Walker, that haue put all fooles and mad men to a perpetuall non plus, whose tongues would otherwise continually bee tampring.
—John Darrel, The Replie of Iohn Darrel, 1602

By the early 17th century nonplus was being used as a verb, with the meaning of “to cause to be at a loss as to what to say, think, or do.” Then, as now, the word is often encountered in its participial form (nonplussed), with a meaning that is nearly synonymous with “perplexed.”

Here may the Non-plust wooer fetch a wile
To breake all Remora's, plots to beguile
All Fortune's crosses: and if language faile,
Here may he learne to court, triumph, bewaile
I'th eloquentest straines.
—Achilles Tatius, The Loves of Clitophon and Leucippe, 1638

For the next three hundred and some years nonplus remained on the straight and narrow, avoiding the temptations of demon rum and semantic drift, and as a result of this managed to keep its meaning remarkably unchanged. And then in the early 20th century some people began to use nonplus to mean “unruffled, unconcerned,” and ever since then the word just hasn’t been the same.

I came just in time to see two policemen pushing the car to one side so that the firewagon could get near the plug.
Of course anyone knows that under very embarrassing circumstances one is to appear non-plussed, as they say, and smoke a cigarette.
—The Pittston Gazette (Pittston, PA), 15 Aug. 1930

The onlooker at the right appears nonplussed at the game the posters offer, but then—she’s only a mannequin.
—The Mason City Globe-Gazette (Mason City, IA), 16 Apr. 1948

Twelve-year-old E. B. “Buzzie” Barker Jr. remained nonplussed yesterday despite the attention and congratulations that he was receiving for having won the Peninsula’s Soap Box Derby Sunday.
”I think we are more excited than he is,” his mother, Mrs. Barton Barker, commented. “He is just about as unconcerned about the whole thing,” she said, but didn’t finish.
—Daily Press (Newport News, VA), 28 Jun. 1955

The “unruffled” sense of nonplussed increased as the 20th century went on, although when it was noticed this sense has been categorically rejected as a mistake. Mistake it may well be, but the fact remains that this sense of the word is in widespread use today, and may be found often enough in well regarded and highly edited, publications.

While senior officials in the Israeli Foreign Ministry fume over the diplomatic mess caused by the implications of the Dubai assassinations, those who know Mr Dagan say he is nonplussed by the row.
—The Times (London, UK), 18 Feb. 2010

There is also the stumbling conversation of the other blind novitiates,but we are all really dependent on the voice of our guide, Romeo Edmead, a vigorous, charming man, completely nonplussed by the tumult we find around us.
—Edward Rothstein, The New York Times, 19 Aug. 2011

If there is a lesson here, it is that you should never trust prefixes (or anything that looks like one). It may leave you nonplussed.