The Misspelled Words of the National Spelling Bee

Are these the hardest words to spell in English?

The Scripps National Spelling Bee is the Olympics of language. Training is important, because English is famously difficult to spell: think of silent letters (psychology, knack), double letters (approximate, chlorophyll), and foreign borrowings (champagne, schadenfreude, appoggiatura)—all of which would seem to contradict phonetic logic. 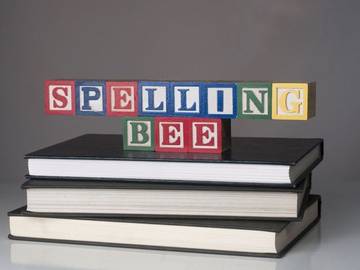 Analysis shows that 48% of the past ten years' misspelled words come from Greek and Latin.

Perhaps the single least logical and trickiest part of spelling is the unstressed vowel sound called the schwa—the most common vowel sound in English—which is what we hear in the first and last syllables of the word "America." Dictionaries and linguists use an upside-down e to represent the schwa: \ə\. The big problem for spelling the schwa is that it can be represented by any vowel letter in English: a in about; e in taken; i in pencil; o in eloquent; u in supply; y in physician. Sometimes we hear a schwa where there are no visible vowels at all, as in the second syllable of rhythm. The Olympic-level spellers at the National Spelling Bee rarely have to guess at a word's spelling in early rounds of competition, but by the difficult final rounds, choosing the correct vowel can become a challenge.

Going beyond representations of the sound of a single troublesome syllable, consider the representations of the sounds of entire words borrowed from other languages. English has always borrowed words from other languages, and once they are found in our dictionaries they are considered to be English words and eligible for use in the Bee. (“Borrow” is perhaps a funny term for this phenomenon, since we never give these words back.)

An analysis of the misspelled words from the Bee’s finals for the past ten years, made in association with Scripps and Babbel, gives us a look at the challenges elite spellers face in competition. Most of the misspelled words—a whopping 48%—come from the classical languages of Greek and Latin. This is statistically logical (at last, something seems to makes sense): many of the “hard words” in English have classical roots, and these include a large number of scientific terms:

These words don’t exactly roll off the tongue, and they remind us that such words have always given English speakers trouble. The first dictionaries of English in the early 1600s were basically lists of “hard words” (or “inkhorn” terms) that were mostly words derived from Latin, Greek, and French. Spellers strategize when studying, and they work to memorize classical roots found in English words, like peri (“around”), ante (“before”), dys (“bad”), and greg (“herd”). These ancient word parts help competitors connect a word’s meaning with its spelling.

With words from modern European languages, however, the more recent the borrowing, the more likely that its spelling is unchanged or nearly unchanged in English. For example, a word like language, taken from French in the 1300s, shows anglicized phonetic and spelling alterations over time, since the French word it came from is langue. Connoisseur, borrowed in the 1700s, looks closer to its modern French equivalent, spelled connaisseur, but they are spelled differently because English borrowed it before French spelling modernized. The spellings of words are often fossils of the development of a language.

Words borrowed even more recently tend to retain their French spellings, even though the sounds the letters represent aren’t well suited to English phonotactics: it’s hard to know how to pronounce tailleur or boudin or, heaven help us, bondieuserie unless one has a working knowledge of how to pronounce French.

And, sure enough, words from French are the most frequently misspelled words from a modern language at the National Spelling Bee, representing 19% of errors during the final rounds. Even very short words are challenging when the only guide for spellers is the anglicized French pronunciation of such words as poilu (/pwah-LOO/) and reseau (/ray-ZOH/). Several years ago, a single-syllable word was misspelled in the finals, something very rare indeed at the Bee, and it was from French: nuque, meaning “the back of the neck,” pronounced exactly like the more familiar nuke.

German and Italian are next in order of difficulty measured by spelling mistakes in the Bee finals. The proportions, 7% and 6% respectively, have more to do with the etymological frequency in English, and not the relative difficulty of the words themselves:

There is always drama and excitement for word lovers at the Bee, and keep in mind that as difficult as these misspelled words are, winning words that are correctly spelled are every bit as tough. Recent winners were feuilleton and scherenschnitte.