A word that had its moment

Whenever the word momentarily is discussed by language lovers, the subject is the word’s definition and usage. There are some who say that because momentarily was first used to mean “for a moment” (as in “We paused momentarily to look at the painting”), it cannot also mean “in a moment” (as in “We will be landing momentarily”). Of course, that’s not true—many words have different meanings and context makes it abundantly clear which one is intended. Nevertheless, there are plenty of people who would simply prefer that we had different words to use for each.

It turns out that we did. Or, rather, we might have. 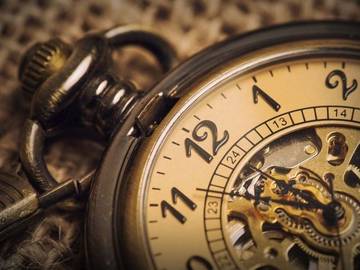 Dictionaries rarely venture into the territory of linguistic alternative history, but imagine for a moment if we had a word that clearly meant “for a moment,” leaving room for momentarily to be used in the sometimes-disparaged sense “in a moment” without confusion. That way, the rest of us would never have to worry about this distinction (or hear from others who worry about this distinction) ever again. Consider this entry from Noah Webster’s dictionary of 1828:

MO'MENTLY, adverb For a moment.

Momently is an older word than momentarily, and it had so much potential. It could have been a contender for a permanent spot in the English lexicon, and it was indeed used for a time. The only problem is that it wasn’t used consistently with a consistent meaning. (We're sticklers for that kind of thing.)

If the true disciples of Christ bee lambs, and kids, &c: then be it pressed to the just correction of the depraved manners of us moderne Christians, whose very lives are, in short, a dayly, horary, momently breaking of that great euangelicall precept of love, and charity.
— John Jackson, The true euangelical temper wherein divinity and ecclesiastical history are interwoven, 1641

And here, long, amid the momently increasing confusion, did I persist in my pursuit of the stranger.
— Edgar Allen Poe, The Man of the Crowd, 1845

Momently retained this meaning in finance; it was used to mean “at every moment” or “continuously”:

Shewing the Amount to which £1 will increase at Compound Interest, according as it is paid yearly, half-yearly, quarterly, or momently.
— Arthur Scratchley, Industrial Investment and Emigration, 1867

It then came to mean—promisingly—the same thing that momentarily initially meant: “fleetingly” or “for a moment.” Here is it used in this way by Samuel Taylor Coleridge in Kubla Khan, writing in 1797:

A mighty fountain momently was forced;

Amid whose swift half-intermitted burst

And 'mid these dancing rocks at once and ever

It flung up momently the sacred river.

A letter from William Wordsworth to Coleridge from two years later showed he used the word with the same meaning:

…the stream shot from between the rows of icicles in irregular fits of strength and with a body of water that momently varied.

With good literary use to its credit, it remained for momently to become established in the language. Unfortunately for momently (and for all of us), the word’s sense drifted further. In The Ostler from 1855, Wilkie Collins used momently to mean “immediately” or “instantly”:

He couldn’t momently name what was the curiousest thing he had seen.

Mark Twain used it in The Prince and the Pauper from 1881, also with the meaning of “immediately,” and he contrasts it with presently, which often is used to mean exactly the same thing, but here is used to mean “before long”:

These sounds are momently repeated—they grow nearer and nearer—and presently, almost in our faces, the martial note peals and the cry rings out, “Way for the King!”

After this, momently sagged considerably and has nearly fallen from use, apparently losing its place to the far more frequently used momentarily. A variant spelling, momentally, probably didn’t help things—it was recorded in Samuel Johnson’s dictionary in 1755 and in Webster’s in 1828, and last appeared, bearing the label obsolete, in our Unabridged edition of 1934 before being quietly removed in 1961. Many words fall from use in English, but it’s too bad that this one only showed promise momentarily.