Can 'Momentarily' Mean "In a Moment"?

Every so often someone will use the word momentarily in the sense “in a moment; soon.” Incidentally, every so often that same person will also have a friend or coworker want to throw a copy of Strunk & White at them while exclaiming loudly. 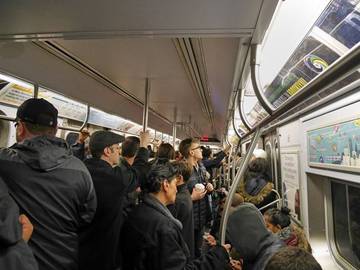 Either way, the train's not moving.

People use momentarily to mean “in a moment” quite frequently, but we have noticed that there are a fair number of people who think that this is against the rules.

FYI, @CNN: "momentarily" means "for a moment," not "in a moment." #TheMoreYourKnow. pic.twitter.com/PFRmPBI3to

Momentarily first found itself on the printed page at the end of the 16th century, and the initial sense of the word was “for a moment.”

….and therfore it is vnpossible to foresee all things, wherby to be able to resiste him, the which is confirmed, but with considering how momentarilie a towne vsed to haue prouisions euery day brough to it, feeleth the wante of them, if vpon vnseasonable weather, or any other respect, they leaue to come for two or three dayes, the people complayning of the trauaile they endure, being many times for things, which they least thought, they should stand in neede of.
— Bernardino de Mendoza (trans. by Edwarde Hoby Knight), Theorique and Practise of Warre, 1597

I was one that momentarily expected his death, from whom I tooke this letter, finding it on his Deske, and seeing it was directed to your Highnesse, I heere bring it to be burnt, least it import some further euil.
— Marcos Martínez, (anonymous trans.) The Eighth Booke of the Myrror of Knighthood, 1599

Despite its showing up first, this sense was not particularly common over the next several hundred years. In fact, the original meaning of momentarily was in such disuse until recently that a usage guide from the late 20th century (the 1985 Harper Dictionary of Contemporary Usage) asked its panelists “would you agree that this very old meaning is now showing new life and should be accepted as standard usage?” and only 60% of the panel gave it a pass.

Momentarily also took on a couple of additional meanings, which are not often criticized, along the way (“instantly” and “at any moment”). In the late 18th century the sense that is often criticized (the one meaning “very soon; in a moment”) began to be used.

By a ship from Jamaica, arrived at Norfolk, we learn that five sail of the line of the Channel Cleet had arrived there, and seven more were momentarily expected with 7000 troops.
— Cobbett’s Annual Register (London, UK), 27 Feb. 1802

I begin to get tired of the warm-constitutioned jade, have sprung fresh game, and expect momentarily to bring it down.
— (Pseud.), The Life and Adventures of Obadiah Benjamin Franklin, 1818

The latest intelligence we have received from head quarters, left General St. Martin and the temporary Viceroy treating for peace or capitulation, and we momentarily expect to learn the result of their conference, which, without doubt, will be favorable to neutral commerce whatever it may be to the parties interested.
— Nashville Whig, (Nashville, TN), 31 Oct. 1821

So we have now ended up with two senses of momentarily which are used more often than they used to be: “in a moment” and “for a moment.” The first one of these is seeing frequent use as more people begin to employ it in speech and writing. The second one appears to get a lot of mileage from people using it to explain why the previous sense is wrong, as well as being the bane of every subway rider's existence ("The train is being held momentarily...").

Many of the English adverbs that people use when they are trying to say “I’ll do it when I get around to it” are flexible in a manner that is similar to momentarily. Presently can be used to mean “soon” and “right now” (although many usage guides caution against the second of these uses). Soon once meant “immediately,” and then got a bit lazy and commonly is used to mean “after lunch.” Anon followed a similar path as soon did, and shortly originally meant “in a few words” before taking on the meaning of “soon.”

Both of the commonly encountered senses or momentarily are valid, and, contrary to the assertions of some critics, there is little ambiguity, and the chance of your audience being confused is slim. When a pilot announces “We will be taking off momentarily” it is generally understood that the plane will soon be in the air; no one responds to this statement by saying “Wait! Does that mean we're leaving soon? Or will we be taking off for just a moment, and then landing again?” We're pretty sure air marshals don't police pedantry, but it's best not to risk it finding out.