Did We Change the Definition of 'Literally'?

Is it ever okay to use literally to mean "figuratively"?

F. Scott Fitzgerald did it (“He literally glowed”). So did James Joyce (“Lily, the caretaker’s daughter, was literally run off her feet”), W. M. Thackeray (“I literally blazed with wit”), Charlotte Brontë (“she took me to herself, and proceeded literally to suffocate me with her unrestrained spirits”) and others of their ilk. 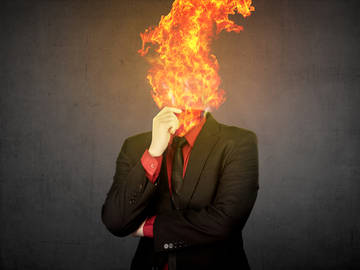 "I literally blazed with wit." William Makepeace Thackeray, Punch, 30 Oct. 1847. The figurative use of 'literally' may be annoying, but it is nothing new.

But the fact that Charles Dickens used literally in a figurative sense ("'Lift him out,' said Squeers, after he had literally feasted his eyes, in silence, upon the culprit") doesn't stop readers from complaining about our definition. We define literally in two senses:

1) in a literal sense or manner : actually
2) in effect : virtually

Some of our readers are not happy about this. Here are a few of the comments left at this entry:

Definition 2: the dictionary is literally wrong.

This is literally the stupidest thing I've ever read.

I literally can't even.

Some people choose not to leave such comments on our site (perhaps they do not wish to hurt our feelings), but still want to make their displeasure clear. These people comment on other forums, as in this sample taken from a comment thread on dailykos.com:

Considering that Merriam-Webster has redefined “literally” to mean “figuratively,” I’m going with literally.

Our poor language, I’m figuratively about to hurl.

Agreed! How you you [sic] agree to accept (I’m looking at you craven dictionary editors!) a word that means the exact opposite? It’s unfathomably stupid.

Never trust anything but the OED...

It's fine to trust the OED, but you might want to check their definition first:

Aaargh! That doesn’t seem very literal at all! The dark forces of "figurative-literalism" must have gotten to them, perhaps by blackmailing the editors. Let’s look at how some other current dictionaries define this word.

literally, adv. … 3.b. Used as an intensive before a figurative expression.
The American Heritage Dictionary of the English Language, 5th edition, 2016

Literally every modern dictionary includes a definition for the metaphoric or intensifying sense of the word literally. Why do we hate the English language so?

There is no plot by dictionary-makers to destroy our language. There is not even a plot to loosen our language's morals and corrupt it a bit. There is, however, a strong impulse among lexicographers to catalog the language as it is used, and there is a considerable body of evidence indicating that literally has been used in this fashion for a very long time. All of the dictionaries listed above also provide usage notes with the definition of literally, indicating that this sense is widely frowned upon. We include a note as well, which reads as follows:

Since some people take sense 2 to be the opposite of sense 1, it has been frequently criticized as a misuse. Instead, the use is pure hyperbole intended to gain emphasis, but it often appears in contexts where no additional emphasis is necessary.

If this sense of literally is bothersome, you needn’t use it. If you dislike hearing other people use it, you may continue to be upset. If you would like to broaden your complaint slightly, and insist that the original meaning of literal is the only proper one, go right ahead (although, before committing to this, you should be aware that this will restrict you to using literal when you mean “of, relating to, or expressed in letters”).

The use of literally in a fashion that is hyperbolic or metaphoric is not new—evidence of this use dates back to 1769. Its inclusion in a dictionary isn't new either; the entry for literally in our 1909 unabridged dictionary states that the word is “often used hyperbolically; as, he literally flew.” We (and all the other “craven dictionary editors”) have included this definition for a very simple reason: a lot of people use it this way, and our entries are based on evidence of use. Furthermore, the fact that so many people are writing angry letters serves as a sort of secondhand evidence, as they would hardly be complaining about this usage if it had not become common.

We understand that many have chosen this particular issue as the one about which they choose to draw a line in the sand, on the grounds that a word should not mean one thing and its opposite (a fairly common thing in English). But a living language is a language that is always changing; this change may be lovely, and it may be ugly. As lexicographers we are in the business of defining language, rather than judging it.