Now you see them, soon you won't—at least not in the store

You know those tiny little bumps in your face scrub that make the scrubbing feel extra good? They have a name: microbeads.

They also have an expiration date: on December 28th President Obama signed a bill into law that prohibits "the manufacture and introduction or delivery for introduction into interstate commerce of rinse-off cosmetics containing intentionally-added plastic microbeads." 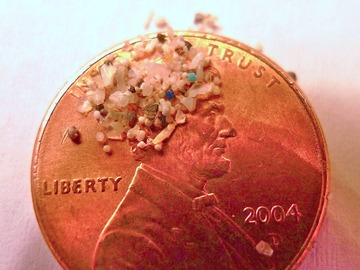 It's called the "Microbead-Free Waters Act of 2015," and it requires that the manufacture and sale of microbeads be phased out starting July 1, 2017.

Though the word microbead dates to 1975, it's only in the past couple years that we've been collecting evidence of the word in general-use publications. That use has increased dramatically as both a number of states and now the federal government have moved to ban the beads, which makes microbead an excellent candidate for dictionary entry.

What's the big deal about microbeads? These tiny spheres of plastic (usually polyethylene or polypropylene) are used as exfoliants in facial scrubs and body washes and to add texture to other personal care products like toothpaste, but because they are too small to be filtered out by wastewater treatment plants they wind up in rivers, lakes, and oceans—and in the digestive systems of the creatures who live there and, in turn, in the digestive systems of people who fish there.

And they aren't biodegradable, which means both the word and what it refers to are with us for the foreseeable future.