Say the word meme and the average English speaker is likely to have any variety of images spring to their mind—perhaps a photo of a furious baby with a caption about some indignity of corporate life, or an image of a voluminous cat who is clearly having none of it. Meme as we most often encounter it these days is used to refer to "an amusing or interesting item (such as a captioned picture or video)," as our definition puts it, "that is spread widely online especially through social media."

Spread widely indeed: they're everywhere. But where did the word meme come from? 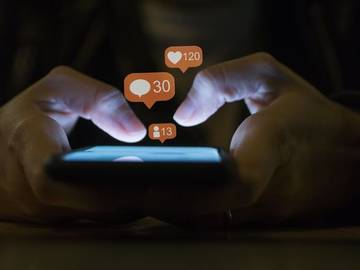 You're right, this needs more cats.

The Origin of Memes

Meme isn't new: it dates to evolutionary biologist Richard Dawkins' 1976 book The Selfish Gene, where it functioned with a meaning other than its current most common one. In Dawkins' conception of the term, it is "a unit of cultural transmission"—the cultural equivalent of a gene:

We need a name for the new replicator, a noun that conveys the idea of a unit of cultural transmission, or a unit of imitation. 'Mimeme' comes from a suitable Greek root, but I want a monosyllable that sounds a bit like 'gene'. I hope my classicist friends will forgive me if I abbreviate mimeme to meme. If it is any consolation, it could alternatively be thought of as being related to 'memory,' or to the French word même. It should be pronounced to rhyme with 'cream'.

Dawkins went on to describe what exactly the word was intended to refer to:

Examples of memes are tunes, ideas, catch-phrases, clothes fashions, ways of making pots or of building arches. Just as genes propagate themselves in the gene pool by leaping from body to body via sperms or eggs, so memes propagate themselves in the meme pool by leaping from brain to brain via a process which, in the broad sense, can be called imitation.

This dictionary defines Dawkins' sense of meme as "an idea, behavior, style, or usage that spreads from person to person within a culture." The word wasn't entered until 1998, when it earned a spot in an update of the Tenth Edition of the Merriam-Webster Collegiate Dictionary. Although Dawkins had coined the word in a 1976 book, it was more than 20 years before the accumulation of examples of the word in use demonstrated that it was a fully established term in the language. Here's the kind of evidence that paved the way for the word's dictionary debut:

Memes are, simply put, ideas that catch on. This book is, not so simply, a collection of memes in essay form …, written by self-proclaimed off-planet journalist Rheingold.
— Eloise L. Kinney, Booklist, 1 June 1988

I seem to have "inherited" two memes—bits of semantic or cultural heritage—from Anton the Smithy. The first was a kind of cynical pacifism, or what one might call an unashamed lack of patriotism.
— Robert Anton Wilson, Cosmic Trigger II, 1991

A decade into the future, and hiphop has thrown its code indiscriminately into the meme pool—it is immanent, endemic, ubiquitous.
— Jeff Yang, The Village Voice, 23 Nov. 1993

And as the years went on, we continued to see the same kind of use:

Once the meme is out there, it's very hard to quash. No amount of evidence will stop a certain segment of the public from believing …
— Michael Hirschorn, The Atlantic, November 2010

Graffiti have been the elemental memes of political speech, from the walls of Pompeii to the New York subways to the Berlin Wall, in all the oppressed countries of this world.
— Claude I. Salem, The New York Times Magazine, 17 Apr. 2011

The Internet and a New Meaning of 'Meme'

But as all this meme use was going on, a new use was bubbling up—the one that in more recent years has become the dominant one. The first instance of this use that we were able to find in the Nexis database of thousands of mostly news publications is a 1998 interview on CNN:

MICHAEL GIRARD, UNREAL PICTURES: The dancing baby actually goes actually goes back to an initial cha-cha motion that I created as a demo file years ago.

LEFERVE: Girard created the baby to show off his animation software. It worked. Now, zillions of the copies of the diapered dancer animate computer screens across the Internet.

JANELLE BROWN, WIRED NEWS: And the next thing you know, his friends have forwarded it on and it's become a net meme.

The particular meme discussed in the interview is believed my many to be the first meme, in the modern sense of the word. But it's interesting to note that, as with most other instances of the word in use for years to come, the example was seen as simply an iteration of the existing meaning.

Like a lot of unsanitary places, 4chan is gloriously fertile. What grows there is memes—ideas and jokes and fads that spread across the Net. Here's an example: there used to be a tradition on 4chan that every Saturday people would post pictures of cats. It was called Caturday. People added captions representing what the cat would say if cats could talk. One day somebody posted a shot of a fat gray cat looking at the camera and saying "I CAN HAS CHEEZBURGER?" Somehow that picture escaped 4chan into the wider Web. Without knowing where it came from, somebody saw it and liked it enough to start a blog about it: icanhascheezburger.com. Soon other people were making their own Caturday-style pictures and calling them "lolcats." Now you can buy lolcat T shirts and lolcat buttons and lolcat fridge magnets. Last September investors bought icanhascheezburger.com for about $2 million.
— Lev Grossman, Time, 9 July 2008

Eventually, though, the new use became clearly established as its own, sense-worthy meaning:

Adrenaline junkies weren't the only ones who marveled as Austrian daredevil Baumgartner broke the world record for the highest and fastest skydive, becoming the first man to break the sound barrier without the assistance of a craft. Scientists and engineers considered the implications of the jump. Internet jokesters went to work creating memes and parody Twitter accounts.
— Maura Judkis, The Washington Post, 16 Oct. 2012

Well, we found a super weird photo of Gwyneth Paltrow looking creepily excited about something. So, naturally, we made it into a meme. BUT, we are but one writing staff, and we only have the energy for so many memes. We need YOUR help! Use the memes we made as inspiration, create your own, and then post a link to them in the comments. We will feature our favorites in a gallery on the site!
— E!, 27 Sept. 2013

Farther down the chart, the Vamps re-enter at No. 24 thanks to fan engagement around their #thevampsmeme competition, where the band encouraged fans to make memes to advertise the U.S. release of their EP Somebody to You (due Aug. 4).
— William Gruger, Billboard.com, 31 July 2014

The new sense of meme made its Merriam-Webster debut in 2015, defined in full as "an amusing or interesting item (such as a captioned picture or video) or genre of items that is spread widely online especially through social media."

The Evolving Use of 'Meme'

These days meme is evolving semantically again, which seems like an appropriately meme-y thing to do. We've spotted it functioning as a verb:

Ariana Grande just unveiled the official artwork for her upcoming album, Thank, U Next, but after a little Photoshop-brainstorming session on Sunday, fans may inspire her to consider some new options. Over the weekend … some Arianators started meme-ing the cover of Ari's fifth album with various pics of the "7 Rings" singer…
— Sara Delgado, Teen Vogue, 28 Jan. 2019

And also being blended with other words, like fantastic:

Without further ado, we introduce to you the most meme-tastic and Internet-trendy stories of 2018 as determined in no particular order and by no scientific means of measurement, whatsoever.
— Madison Dapcevich, IFLScience.com, 1 Jan. 2019

Of course, these are memes (sense 1) that have yet to catch on—but we'll be watching to see if they do.

MORE TO EXPLORE: The Internet and the Dictionary