The boy opened the window.

The passive voice asserts that the grammatical subject of a verb is subjected to or affected by the action represented by that verb:

The window was opened by the boy.

Knowing that distinction, consider these examples:

The house sold in four days.

In all of these examples, it is clear that the verbs are intransitive, yet the subjects are receiving, rather than performing, the action indicated by the verb. The window is being opened, the landscape is being photographed, and the house is being sold. So what is going on here? These examples fall into the category of what is called mediopassive voice. 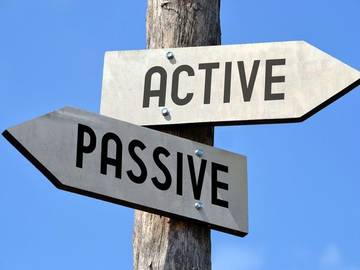 The mediopassive is often employed by critics, in constructions like "the dish ate salty."

Mediopassive voice is considered a form of middle voice, which asserts that a person or thing both performs and is affected by the action represented. In the dictionary, mediopassive voice is defined as "a form or voice of a transitive verb which by origin is of the middle voice or is reflexive and shows by its meaning that it is developing toward passive use, or is used in both middle and passive meanings, or is used only in passive meanings."

In the case of the mediopassive examples shown above, the action is being qualified (usually with an adverb or adverbial phrase) as though it is being evaluated as to how well the object responds to the action being performed on it. Say you're taking a car out for a test drive. You might be the one driving the car, but if you like the feel of it after the test, you might say "The car drove smoothly." The car wasn't the agent doing the driving—you were—but the sentence seems to comment on how well the car received the action of your driving it.

For this reason, the mediopassive turns up rather frequently in constructions employed by critics and writers tasked with judging or rating something. If you watch Top Chef, for example, you might hear the judges tell the contestants that their dish "ate salty." Similar constructions appear in reviews for wine, books, and video games:

Despite the region's hot climate, the wine drinks with a surprising deftness. It's not overly extracted and dense, but smoky and sharp instead, with dark fruit notes casually wafting from the glass and not jumping out with reckless abandon.
— Craig Cavallo, Saveur, 29 Dec. 2015

The book reads like first-person reportage, and Defoe was a journalist as well as a novelist, but the book is set in 1665, when Defoe was only five years old.
— Cynthia Crossen, The Wall Street Journal, 21 Nov. 2011

Knowing which gear to turn, from round to round and game to game, will allow you to get the most out of your territories. Unfortunately, that also means the game plays a bit like multiplayer solitaire at times.
— Charlie Hall, Polygon, 7 Feb. 2018

In all of these instances, the verb takes on a suggestion of perception. When you say "the car drove smoothly," you are remarking on how the car felt while you were driving it. A similar effect is at play in the old Chunky Soup slogan, "the soup that eats like a meal." Obviously, it's not the soup doing the eating, it's a person eating the soup. (Though it might be tempting to make a joke about Soviet Russia, where the soup eats you. But who on Earth would do something like that?)