Some people deplore Internet coinages for flattening a vibrant language: laughing heartily becomes LOL or some variant thereof; exclamations of genuine surprise are shortened to OMG, which is sprinkled liberally throughout dialogue everywhere until it ceases to mean anything; don't even get them started on emoji. 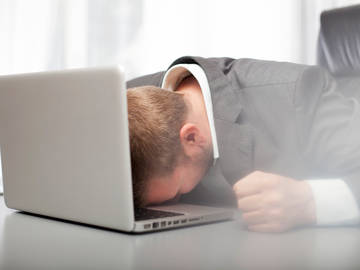 The word 'headdesk' comes into English from physical comedy: the banging of a person's head against a desk to show just how exasperated they are.

But the Internet has given us a very evocative and linguistically creative word to describe an action we are all familiar with: headdesk.

The word headdesk is used most often interjectionally, or a parenthetical comment on something:

Re: Unconditional Love:
Questions like this make me think that the asker is too wedded to abstract principles. And there are some pernicious ones out there, like "The One" and "soul mate" and "we were meant to be together."
Headdesk.
—Carolyn Hax, The Washington Post, 24 May 2014

But it also has straight-up noun use as well:

It's also occasionally used as a verb:

While I headdesked when the heroine fell not only for every red herring thrown her way, but also for the oldest trick in the book—a scribbled note from her lover telling her to "come alone"—I did appreciate it that, surprisingly, the secret society turned out [SPOILER!] not to be evil [END SPOILER].
—Kirkus Reviews, 14 May 2012

And, like many verbs, is heading into gerund territory:

I am ashamed of humanity's inability to confront and overcome this hatred. I am appalled at Britain's callous response to people who need help. And I'm headdesking on a daily basis at the crass stupidity of governments who can't see this problem is not going away.
—The Mirror (UK), 24 June 2015

In all these contexts, headdesk is used to express frustration or exasperation.

The word comes into English from physical comedy: the banging of a person's head against a desk to show just how exasperated they are. This is an old trope that shows up everywhere from comic strips like Archie to movies like The Muppets (2011) to a slew of TV shows, like Ally McBeal, Blackadder, The X-Files, and Buffy the Vampire Slayer.

Our first hints of what would become headdesk show up on Usenet in the late 1990s. One typical early use was give by one poster to alt.fans.james-bond, who responded to another's boneheaded question with "thump thump thump thump[1] ... [1]head/desk interface sounds." We have similar uses of "head, desk" with sound effects ("head, desk, bang, bang, bang" or "head, desk, thump, thump, thump") from Usenet for several more years. Then, around 2002, the sound effects fell away, and we were left with "head-desk":

Sweetie looked at me really funny when I told him about it. He didn't get it either. head-desk, head-desk
—post by "Mariot the Batwench," alt. fairs.renaissance, 22 Oct. 2002

Headdesk and its slightly older cousin facepalm are unique creations, and creative ones, too: English has no other common words that are compounds of two nouns in which the first noun is physically and literally applied to the second noun.

Given that headdesk has moved beyond mere exclamation and is now being verbed, it's likely that it will be considered for entry into one of our dictionaries sooner rather than later.