How 'Facepalm' Became a Word

A gesture of exasperation, disappointment, or stress

The facepalm (a gesture of exasperation, disappointment, or stress) is typically represented by an image of a person placing their face into either one or both of their hands. Although the concept of the facepalm has existed for hundreds (if not thousands) of years, we do not see written evidence of the actual word until about 20 years ago. Dictionaries are generally concerned with written and spoken language, rather than gestures, and so we have just recently begun to pay more attention to the word, based on its greatly increased use. 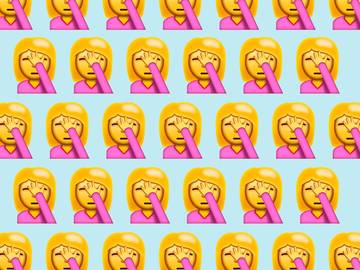 Here's how the proposed facepalm emoji might look (h/t Emojipedia)

Currently, the earliest known evidence of this word is found in records of a Google Group (bit.listserv.superguy) from May 15, 1996: “Christie facepalmed. ‘Well, her hair was red this morning, right? It's blonde now. You figure it out.’” It appears again less than a week later, in another post in Google Groups: “Lee facepalmed. ‘Arrgh...’”

Although both of these early uses of the word employ it as a verb, facepalm (as well as variants face-palm and face palm) is also widely used as other parts of speech.

Frustrated with what can only be described as a deliberately obtuse response from Mr. Calandra, who was being asked to defend his behaviour, Mr. Dewar gave up and did a face-palm. (Winnipeg Free Press, Editorial, September 29, 2014)

There’s a kind of facepalm moment in the terrific pilot episode of Amazon's terrific new series Transparent when you realize that the title is a pun. (Los Angeles Review of Books, September 26, 2014)

The gesture has achieved the status of Internet meme, often articulated by a photo or illustration of a person performing a facepalm (particularly the image of Patrick Stewart, in the role of Jean-Luc Picard in the television series Star Trek: The Next Generation). And the Unicode Technical Committee is considering an official facepalm emoji for release in June 2016. Digital citizens who have the need to wordlessly express such sentiments as chagrin, botheration, and befuddlement will have to sit on their hands until then.

Time will tell whether the facepalm will follow previous memes (such as the ‘I can has cheezburger?’ cat) into the realm of relative linguistic obscurity, and if it does, whether the word will disassociate itself from the image and become a lasting part of our vocabulary.