A Word on the Classical 'Collateral Adjective'

The adjective collateral is derived, via Anglo-French, from Medieval Latin collateralis, a combination of the prefix com- (the prefix is col- when used before the letter l), meaning "with, together, or jointly," and lateralis, meaning "lateral." Lateral itself is ultimately from Latin latus, which means "side" and which influenced the "accompanying" senses of collateral, often with the connotation of being secondary or auxiliary in company.

In his bright radiance and collateral light / Must I be comforted, not in his sphere.
— William Shakespeare, All's Well That Ends Well, 1602-1603

That he was altogether in the wrong on the main question, and on all the collateral questions springing out of it….
— Thomas Babington Macaulay, "Francis Atterbury," December 1853 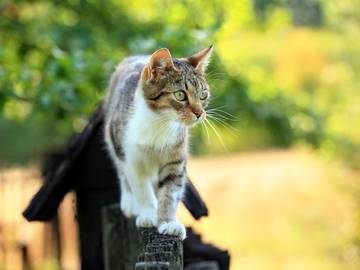 A collateral adjective is one that is etymologically distinct from its related noun—such as 'feline' (from Latin 'felinus') and 'cat' (Latin 'catta').

Collateral, eventually, came to mean "belonging to the same ancestral stock but not in a direct line of descent"—for example, cousins can be considered collateral family members. It is probably from this meaning that the term collateral adjective came to be. The term was prominently used by the reference book publisher Funk & Wagnalls in the 20th century, and its concept is still applicable when discussing word origins.

Flood comes from an Old English word. Its collateral adjective, diluvial, and its closest synonym, deluge, derive from the Latin word for flood.
— Funk & Wagnalls Modern Guide to Synonyms and Related Words, 1968

Collateral adjectives are usually of Latin or Greek origin and are not etymologically related to their associated noun forms—rather, they are only semantically linked. For example, the adjective lunar (from Latin luna, meaning "moon") is commonly aligned with things related to the moon, as in "lunar eclipse"; moon itself, however, is of Germanic origin and evolved from Old English mōna. Similarly, the adjective feline (from Latin felinus) is associated with cats, but the noun cat is believed to be from Latin catta; canine, which refers to dogs, is derived from Latin canis (meaning "dog"), but dog traces to Old English docga (after that its origins are obscure); and simian, which means "of, relating to, or resembling monkeys or apes" is from Latin simia ("ape") and Greek simos ("snub-nosed").

Other examples of collateral adjectives (and their related nouns) are pluvial (rain), dental (tooth), puerile (child), cerebral (brain), and thermal (heat). Some collateral adjectives are distantly cognate with their related nouns; for example, bovine (an adjective associated with cows) is derived from Latin bos (meaning "cow"), to which cow is akin, and ocular (an adjective that refers to the eye) is derived from Latin oculus ("eye"), to which the noun eye is akin.

Collateral adjectives are fairly common. When you peruse our dictionary, see if you can spot other examples. They are the adjectives having classical derivation that are defined by nouns that are strikingly different from their spelling. The adjectives and nouns are only collaterally—that is, indirectly—related, and that's by definition.