'Mano a Mano': A Hands-On Approach

Notes on a sometimes confusing borrowing

Mano a mano usually refers to a conflict between two people and directly translates from Spanish to "hand to hand." However, it is sometimes confused with man-to-man, which refers to a frank conversation usually between two men or a one-on-one defensive play.

The English language has long been a generous adopter of words and phrases from other languages. In many cases these words have entered into our language through the time-honored traditions of war and conquest, or through such avenues as trade. One some occasions (as with schadenfreude) the word comes into English with little fuss, and retains much or all of its original meaning. Other words, such as mano a mano have a slightly rougher entry. 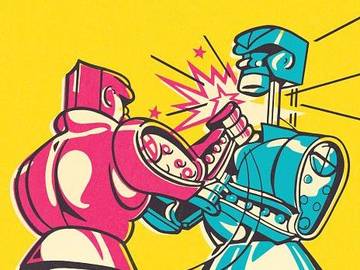 Meaning of 'Mano a Mano'

We define mano a mano as “in direct competition or conflict especially between two people.” The word comes from Spanish, in which it has the literal meaning of “hand to hand.” Mano a mano comes from bullfighting, describing a type of duel between two matadors.

A keen rivalry developed between Garza and “El Soldado” (“The Soldier”) and they had the honor of fighting “mano a mano,” or “hand to hand,” before a capacity crowd in the ring here while still “novelleros,” or apprentice bullfighters.
— The Ogden Standard-Examiner (Ogden, UT), 11 Dec. 1934

However, in part because of the Spanish word for hand (mano) resembling the English word for man (man), some people assume that mano a mano means something closer to man-to-man.

The Rams seldom vary from their tried-and-true zone. And Irvin said he hadn’t seen any teams even try to stop the Dolphins with a man-to-man defense. So why were the Rams caught playing mano-a-mano against the NFL’s Main Man and his Merry Men?
— John Weyler, Los Angeles Times, 15 Dec. 1986

After a full day of competition, the state championship is hanging in the balance of one battle. Andrew Wang and James Lung are squared off, mano a mano - as mano as 10-year-old boys can be, anyway - renewing a budding rivalry between two of the best young players in Massachusetts.
— The Boston Globe, 24 Jun. 2007

Man-to-man carries a different meaning in English than mano a mano; it is defined as “characterized by frankness and honesty - usually used of a discussion between two men,” or “of, relating to, or being a system of defense (as in football or basketball) in which each defensive player guards a specified opponent.”

The conflation of mano a mano and man to man is not yet common enough that we would consider it a variant meaning and add a new definition. It seems likely that there will continue to be people who use mano a mano and man to man interchangeably for some time to come. If you are one of these people don’t feel bad about it, for English is filled with similar kinds of words and idioms that often seem synonymous, but aren’t.

For instance, head to head seems like it should be the same as tête-à-tête, since tête-à-tête is French for head to head. But head to head is defined as “in a direct confrontation or encounter usually between individuals” and tête-à-tête is “a private conversation between two persons.” And while you may think that toe to toe is similar to cheek to cheek, the former means “facing one another” and the latter simply means “with one another's cheeks touching.” And while cheek by jowl has some similarity to cheek to cheek it should not be confused with neck and neck (which also refers to being close, but is used in the context of a race or contest, rather than, say a dance).

Some people find that knowing the origin of a word helps them to distinguish it from others. If you are one of these people, you may find it easier to keep mano a mano and man to man separated with the knowledge that man comes from the Old English man (“human being”), while mano is traced back to the Latin word manus, meaning “hand.”