Our familiar sense of lumber, meaning basically “sawn planks,” was born in North America in the 17th century. But that’s one of the few things we can say with certainty about the word’s odd history. 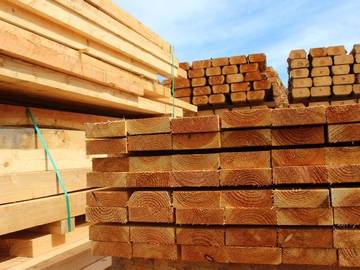 This new use of the word showed up in print just decades after the Pilgrims' arrival in 1620.

In its older meanings, the word had been around in Britain for many decades before it showed up in America: as a verb, meaning chiefly “to move ponderously,” and as a noun, meaning chiefly “surplus or disused articles that are stored away.” This latter sense possesses a colorful history, which begins in the region of northern Italy called Lombardy.

When a mans house is on fire, he does not so much looke to his lumber, and trash, and ordinary stuffe, but he labours to preserve his treasure and Iewels, his deeds and evidences.
— Thomas Adams, A Commentary, 1633

Having acquired an international reputation as bankers and lenders, native Lombards began arriving in England in the 14th century, establishing themselves particularly in the area of London that is still today its financial district, and near the street still known as Lombard Street. Soon the term lombard was being used for lenders in general. And because lending at its most basic level often involved pawning goods as security for loans, the Italians’ pawnshops came to be known as lombard-houses or lumber-houses, or simply lombards or lumbards. Since pawnshops have historically had a sketchy reputation as repositories for fenced goods, lumber-house, or lumber, acquired the extended sense of a house where thieves store their stolen property.

Does thy Cozening Lawyer want a Memento Mori?
The Scrivener dried Parchment for thy Mortgages?
Thy Surgeon want a Skeleton? thy 'Pothecary a Mummy?
And thy Brother Belzebub a Broker's Shop?
Thy Lumber-house of Antiquity would furnish 'em all.
— Elkanah Settle, The World in the Moon, 1697

Pawnshops often incorporated warehouses for their larger objects, and thus the “stored articles” and “pawnshop” senses seem potentially related. But any possible link between the noun and the verb—on the grounds that stored-away furniture tends to be bulky, and ponderous movement implies bulk and weight—is probably only indirect.

And any link between either of these and the common American noun sense seems attenuated as well. In Britain, the word timber has long been used not only for standing trees suitable for construction but for sawn planks as well. Only in North America—a continent of vast forests when the settlers arrived, at a time when Britain was already largely denuded of its woods—do we distinguish between timber and lumber.

No one could miss the aural and orthographic similarity of the two words, and indeed many Americans still confuse them. Does this suggest that one may have influenced the other? Though there’s no real historical evidence, most of us perhaps implicitly assume so.

And is it possible that a term for “pawnshop” or “stored articles” in Britain could have expanded to include the sense “sawn planks” merely by crossing the pond? Such a rapid and radical transformation—the Pilgrims arrived in 1620, and the word’s new signification is showing up in print by 1662—might seem improbable. Did the novel abundance of a precious resource for construction indeed call forth an important new American meaning for an old British term? Or should the American lumber instead be seen as a new word? We'll keep moving ponderously (as lexicographers tend to do) in the direction of the truth.