Each of the four seasons has words that are peculiar to it. The fall has autumnal ("of or belonging to autumn"), while winter has brumal ("indicative of or occurring in the winter"). There are a host of words relating to summer, ranging from estivate ("to spend the summer usually at one place") to serotinal ("occurring in the latter half of summer"). What of spring? 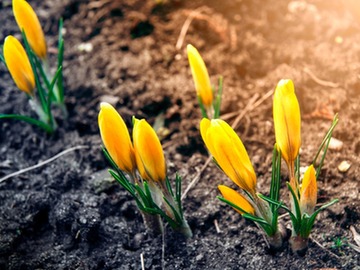 'Pullulate', meaning "to sprout," is still a term in general usage. 'Repullulate' ("to bud anew"), not so much.

There is vernal ("of, relating to, or occurring in the spring"), and its obscure cousin, vernant.

No one alive has seen spring come as early as it will this year, due to a complex combination of natural and man-made occurrences. This year, the vernal equinox, which signals the beginning of spring, occurs at 11:50 p.m. Eastern Daylight Time on Thursday, March 19.
— Beth Dalbey, Patch.com, 4 Mar. 2020

If we look back several centuries, and include words that are now thoroughly obscure, we may find a number of additional words that are applicable to this season that is the favorite of so many.

Henry Cockeram’s 1623 The English Dictionarie was one of a number of lexicons published in the 17th century that were referred to as "hard word dictionaries" (since they typically aimed to define difficult words, and omitted much of the common language). Cockeram included a number of words that sprang from the Latin vernus ("pertaining to spring"). Among these were vernate ("to wax young againe") and vernaculous ("a yong or green wit").

Also found in this dictionary were a handful of now-archaic terms for springtime occurrences, such as repullulate ("to spring or bud anew") and egerminate ("to spring, or bud out").

A prologue to the Reina Sofía exhibition includes some of the “light paintings” Stojka made of her childhood. We see women in kerchiefs and long dresses as the sun sets beside their caravans. Sunflowers blossom like fireworks. Willows pullulate with blotchy foliage that recalls her fellow Austrian Gustav Klimt.
— Jason Farago, The New York Times, 27 Jan. 2020

Some of these words were certainly in use before being recorded in the 1623 dictionary; for some others there is speculation that Cockeram coined them, by adding an English suffix to a Latin word.

Cockeram’s dictionary makes for delightful reading for anyone who has ever pondered something and thought "there ought to be a word for that"; very often there is a word for the thing in question, and it is buried deep in a dictionary from four hundred years ago. Many of the words he defined have not lasted until the modern day, and they are on occasion hard to take very seriously. But it is impossible not to be charmed by any work that includes words for such concepts as "the warmth of the sun in the winter" (apricitie), "a person whose hair has never been cut" (acersecomicke), and "to insult someone in the manner of a drunk" (debacchate).

So this spring, as the leaves begin to pullulate and the flowers egerminate, think kindly of Henry Cockeram, the largely-forgotten lexicographer of time gone by, and a man who—perhaps unintentionally—did his best to make our language more florid.