'Loan' has been a verb in English for 700 years. So why are people still complaining about it?

If your local bank approves you for a loan, then are they loaning you money or lending you money?

Much ink has been spilled over whether you can use loan as a verb. Some usage commentators claim that the correct verb is lend. Is it? 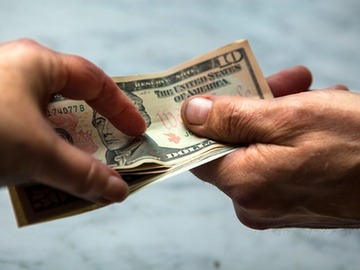 The verb 'loan' entered English in the early 1300s. So why do some people insist that the only correct verb is 'lend'?

It is true that loan was originally a noun to refer to a gift or a grant by someone in a better position than the recipient. This loan came into English in the 1200s. The verb loan, however, showed up not long after in the early 1300s. So are we really arguing about whether it's appropriate to use a verb that's been in the language for 700 years?

We are. It begins with Richard Grant White, a grammarian of the 19th century, who in his book Words and Their Uses, Past and Present declared that loan cannot be a verb at all, but must be a noun, because of its etymology: "The word is the past participle of the Anglo-Saxon verb lænan, to lend, and therefore of course means lent." Alas, poor White: loan is actually not the past participle of the Anglo-Saxon (aka Old English) verb lænan. Loan, both verb and noun, came into English from Old Norse.

It turns out that the verb loan had fallen out of use in England during the 18th and 19th centuries in favor of lend. (Lend is the earlier word, dating back to about the 11th century, and comes from the Old English verb lænan.) But loan as a verb survived in American English, which hadn't kept pace with the changes to the language that were happening in British English. British English speakers noticed the verb and decried it as uncouth and provincial—it had to be if it was in the mouths of Americans. This dislike of the verb loan carried over into the late 1800s, though by the time White wrote his book in 1870, that dislike had become unhitched from British nationalism. White just happened to couch the generalized dislike in something that looked like scholarship.

His prohibition on the verb loan spread far and wide, even after his terrible etymologizing was debunked, and persists to varying degrees today. Bryan Garner, in his 2016 Garner's Modern English Usage, Fourth Edition, writes that loan as a verb to refer to money "has long been considered permissible," but loan as a verb to refer to things is not as permissible. This in spite of the fact that the written record shows that loan has regularly been used to refer to things for almost 400 years now.

What's a writer to do? Loan as a verb is perfectly standard and has been for quite a while, though it's worth noting that it can only be used literally, as in "the bank loaned us the money." If you are worried that someone will take you to task for using loan as a verb, then you can always use lend as a verb. Figurative uses, like lending a hand or lending her support to the project, require lend.