Anyone who’s grown up with video games knows that a lot of them come with a structural hierarchy of progress. You find the tomb, you defeat the monster, you collect the loot and maybe the clue to the next part of the journey, and then you move on to the next level. It’s a simple, graspable way to assess where you are in contrast with where you need to be.

People who write about video games have naturally used level up as a phrasal verb for advancing from one level of a game to the next:

In-game tutorial – several things were designed from scratch, while others were remodeled. It will help you understand better the core gameplay mechanics, like leveling up and the use of power-ups.
— Dom Reseigh-Lincoln, Nintendo Life, 25 May 2018 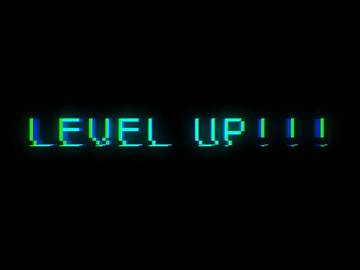 We don't have any Fortnite tips, sorry.

As a noun, of course, level refers to a position in a scale or rank. The verb already has several meanings in English, most of them relating to the idea of making something level—that is, with a flat or even surface, as in using a hoe to level a garden or an earthquake leveling a building—or horizontal, as in leveling a gun at a target. When a figure (such as an unemployment rate) levels out, it remains steady over a period of time.

Before, whenever we spoke of “leveling up,” it usually meant to increase or improve it to meet the level of something else:

This in turn could lower teachers' expectations and in the longer term lead to levelling down as opposed to levelling up.
— Barbara MacGilchrist, in Primary Education: Assessing and Planning Learning, 1996

It’s also used in the field of surveying to mean “to find the heights of different points in (a piece of land) especially with a surveyor's level.”

The modern use of level up as a verb—to advance up a level—pertains to a sense of level that doesn’t already see much verb use associated with it: the gradations of progress in a game. The vocabulary of video games continues to make itself known in common parlance, as now one might Tetris one’s belongings into a moving van or Frogger across a busy city street.

Now the phrase can be found in a range of contexts outside of the video-game universe, suggesting any kind of advance to the next level—whether it be a promotion at work, an upgrade to something more impressive, or a greater presence in the public consciousness:

There’s definitely a feeling that the climbing circuit has ‘leveled up,’ … A lot more is on the line, the leaders in the sport are finding themselves in a bigger spotlight, and the sport is growing extremely quickly in terms of spectators — which makes sense.
— Tom Boyd, in Boulder Weekly, 31 May 2018

Like many notable American shows this year including Atlanta and Westworld, Dear White People has leveled up in quality during its second season — no small feat considering how consistently strong it was during its freshman outing.
— Matt Zoller Seitz, Vulture, 8 May 2018

Let’s open the discussion up to history, then, but focus on pitchers who might fit this career arc. In other words, players who took successful careers and leveled up into a truly insane stretch of dominance after they turned 30.
— Emma Baccellieri, Sports Illustrated, 5 June 2018

And level up can be a transitive verb, too:

One of the biggest problems Chasen found right away was that information about training programs and associated resources is so diffuse and disorganized that workers looking to “level up” their career prospects have a hard time making a confident decision.
— Chad Swiatecki, The Austin Monitor, 6 June 2018

A few days after Drake leveled up his beef with Pusha-T by releasing the scathing “Duppy Freestyle” — in which he told Pusha he’d send him an invoice for the boost in album sales Drake was about to gift him — Pusha has responded with “The Story of Adidon.”
— Jordan Crucchiola, Vulture, 29 May 2018

All that's left for level up is to defeat the final boss (continued widespread, meaningful usage) and, if the princess is in the right castle, earn a place in our book.