'Tetris' is Being Used as a Verb

Tracking the real-world applications of the classic video game

Kids who grew up in the '80s and '90s remember Tetris. For decades, the game has challenged our hand-eye coordination and ability to make snap decisions (not to mention made us see falling blocks in our sleep). Tetris hasn't gone anywhere—it's still around, playable on just about any device. 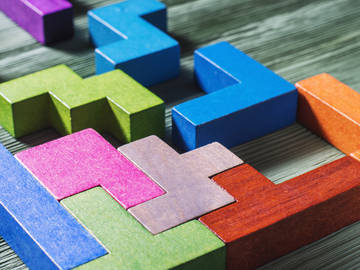 Is anything as satisfying as finishing a row?

Invented in 1984 by Russian programmer Alexey Pajitnov, Tetris requires players to arrange blocks of various shapes that "fall" from the top of the screen in a way so that they fit together efficiently at the bottom of the screen. Points are scored for every "line" that is completed, with the blocks falling at a higher rate of speed as the game progresses.

The name Tetris (coined by Pajitnov) derives in part from the Greek prefix tetra-, meaning "four," a reference to the fact that each block consists of an arrangement of four adjoining cubes (known among gamers as tetrominos).

The game known as Tetris has pervaded the culture to such an extent that it has inspired occasional, creative use of Tetris as a verb, one meaning something along the lines of "to arrange the parts of (something) to fit efficiently within a limited space":

The trip almost got off on the wrong foot, though: despite preliminary measurements, says Hogan, the organ "came very close to not fitting" in the rental van. The crew managed to Tetris it inside, and though it was a tight squeeze, that didn't bother Hogan: "All three of us have so many miles in band vans between us, it's pretty normal to be resting my arm on an organ as we're traveling."

Unlike The Polyphonic Spree, though, everyone in Mother Falcon plays an instrument during this performance: There's no chorus of backup singers among the 17 men and women who play guitars and horns and keyboards and woodwinds and strings here. Which made Tetris-ing each member behind Bob's desk a bit of a challenge, but Mother Falcon knows its way around cramped spaces…
Stephen Thompson, NPR.org, 17 Aug. 2013

I'd gone grocery shopping the day before, and the crowded kitchen shelves were Tetrised with Betty's favorites: mac and cheese, Cheerios, cinnamon grahams.
Amy Shearn, The Mermaid of Brooklyn, 2013

In front of the Doctor now was a gleaming cliff made up of different apartment blocks, terraces and observation needles, all built to jostle for a view of the sea, tetrised together, blocking out the rest of the city, except for the odd tower and spire that peeked over.
Lance Parkin, Doctor Who: The Eyeless, 2010

People kept arriving with food. Cars kept trying to Tetris themselves into a driveway so steep it's a stretch for three— impossible for more.
Lisa-Jo Baker, Surprised by Motherhood, 2014

The use of Tetris as a verb is still too rare for dictionary entry, but it has nonetheless become an option as a word for clever spatial arrangement. And you can even prefix Tetris if you need a verb for removing something from said configuration:

Sterling cracked the side door before the van stopped. The men de-Tetrised their saddles and rigging bags and scrambled into the concourse, to the earthen circle of the arena…
Sam Eifling, Sports Illustrated, August 2014

Tetris is hardly the first verb to be coined from a video game, by the way. Consider these examples:

The thing is, I see a double standard here: When Jon Kasich was incorrectly eating pizza or Pac-Manning his way through Bronx deli menus, no one questioned what the food would do to his figure or asked him to produce some caloric numbers to let readers do the guesswork.
Katherine Speller, Bustle, 19 Apr. 2016

And then the night came back to me in fleeting patches: walking and walking and walking aimlessly, shivering, tucking my arms inside my T-shirt, cursing out a security guard guilty only of trying to help me find my way back to the hotel, and the blaring of car horns as I Froggered across the Vegas strip on foot.
George Watsky, How to Ruin Everything, 2016

It is a testament to these games' timelessness that the writers using these verbs expected their audiences to intuit what they meant. Pac-Man and Frogger have, like Tetris, been around for over 30 years. Pac-Man here means "to devour," much like the character gobbling pellets and ghosts in the popular 1980s game. Frogger means roughly to "to maneuver through by dodging traffic approaching from the side," like the game where you avoid getting splatted by cars. Now we just have to wait and see if characters in future novels might be "candy crushed."