You're going to be the smartest person at laser tag

Where does the word laser come from? Is it an acronym or an initialism? Is the author of the first sentence in this paragraph going to be banished from dictionary-land for ending it with a preposition? There are so many questions. For an answer to the final question, you may go here. For answers to the first two simply read on. 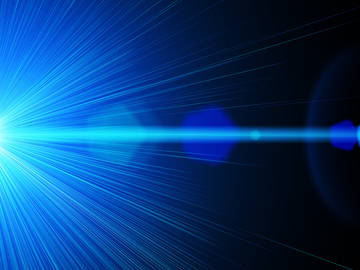 Do not stare directly at this image

Laser is an acronym, which we define as "a word formed from the initial letter or letters of each of the successive parts or major parts of a compound term." Acronyms formed primarily from initial letters include scuba ("self-contained underwater breathing apparatus") and NATO ("North Atlantic Treaty Organization"). Those formed by connecting some or all of the initial major parts of compound terms include amphetamine ("alpha + methyl + phen- + ethyl + amine").

It should be noted, for the sticklers out there, that we also include in our definition for acronym the sense that some people (and you know who you are) feel is more properly applied to initialism: "an abbreviation (such as FBI) formed from initial letters." While some doughty souls insist on reserving the use of acronym for words that are pronounced as actual words (OSHA), and initialism for those that spell out the initials (CIA), most people have decided that life is too short to spend on such distinctions, and use acronym for both.

The words on which laser is based are "light amplification by stimulated emission of radiation." Try saying that three times fast and it quickly becomes apparent why we've adopted the shortened version. The word entered our language in the late 1950s, and it did not take long before it began appearing in a large number of compounds.

For instance, a laser beam, when reaching the moon 250,000 miles away, would illuminate a lunar area less than 10 miles wide, whereas a searchlight, if its light could reach the moon, would spread its beam over 25,000 miles.
—Joseph Zullo, Chicago Daily Tribune, 8 Jun. 1960

Someone is passing information eastward about a laser-guided missile, and David Lancaster finds his brand-new love life interrupted by his having to participate in the investigation of treachery.
–Alice Cromey, The Chicago Tribune, 11 Jun. 1967

Shortly after the arrival of compounds laser began to see use in an attributive sense ("something resembling a laser beam in accuracy, speed, or intensity").

Without the conditioning provided by Miss Kelso and other teachers in the lower grades, no one would have been prepared for the hypnotic eyes and iron discipline of Miss Milner, who readied us for the great leap to Junior High School by instilling order with a laser glare.
–The Montgomery Advertiser (Montgomery, AL), 22 Apr. 1967

It is a world of forms, rituals, brutal imagery, and pseudo-power, cast in the phallic world of a convict’s night dream, but its laser glare cuts straight to truth.
–Thomas Willis, The Chicago Tribune, 25 Nov. 1967

A few weeks ago I was in the Metropolitan National Council Auditions, and I won second prize. My teacher and I were pretty pleased, but when I told Capobianco, he gave me that laser look and said, “Why second prize?”
–The New York Times, 8 Dec. 1968

So the next time you find yourself at a cocktail party, bereft of the sort of inconsequential chatter that passes for light conversation, you now may entertain (or annoy) your fellow guests with information on either the origins of laser or the proper significance of acronyms. For extra showmanship, you could even throw a laser pointer into the mix.