Can You Earn a Single ‘Kudo'?

A pat on the back for a back-formation.

We employ the noun kudos as a way to refer to praise (such as for an achievement) or fame and renown resulting from that achievement. The English word comes from the Greek kydos, where it means the same thing.

She was equally irritated, when the motor returned through Gopher Prairie, to find that she was proud of sharing in Bresnahan's kudos as people waved, and Juanita Haydock leaned from a window.
— Sinclair Lewis, Main Street, 1920 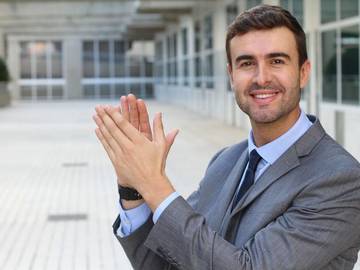 Here's one single clap, just for you.

Kudos is in the same category of other Greek-derived nouns ending in –os (e.g., pathos, ethos, and mythos) that ostensibly serve as abstract nouns in Greek. What separates kudos from those other words, however, is that, due to its –s ending and the kind of contexts in which it often appears, it is sometimes interpreted in English as a plural noun, encouraging some writers to clip off the –s and treat kudo as singular:

All in all, it seems new Louis [Armstrong Stadium] can take a bow. And it even got a kudo from Simona Halep, the No. 1 seed who played the first match there on Monday and lost to Kaia Kanepi.
— Jeff Williams, Newsday, 1 Sept. 2018

‘The Man Who Invented Christmas’: This Charles Dickens biopic deserves a kudo or two for sometimes portraying the beloved author as a borderline psychotic and referencing horrid elements of his 19th century childhood.
— Bob Strauss, The Los Angeles Daily News, 22 Nov. 2017

Appropriately enough, Wyman was surprised with the presentation of the BluesFest Lifetime Achievement Award, a kudo he took with his classic stoic demeanor that temporarily softened at points in the show when Wyman let up on his “thanks to my friends who came out of the woodwork” jokiness to reveal a very sentimental and visibly moved music vet.
— Steven Gaydos, Variety, 29 Oct. 2016

English has a number of words that often get interpreted as plural simply because they end in –s, and, by way of hypercorrection, get occasionally reformed in what is meant to be singular, even though they were never really plural in the first place.

The inclination to interpret kudos as a plural noun is partly justified by the fact that other nouns for things you receive as praise—such as congratulations, along with accolades, awards, and honors—are actually plural. In the 1920s, honorary degrees and other such merits were listed in publications such as Time and collected under a header such as “Kudos conferred during the week,” which understandably would have led to the interpretation that the word was plural.

Kudo is not alone in this strange development. Two very common words in our language came about because their original forms were wrongly interpreted as plural. Cherry was formed from the Old North French noun cherise, which was misconstrued as a plural; and pea was formed from the Middle English plural noun pease.

The pattern can be seen even in more modern words. The noun Pilates, referring to the exercise regimen, is named for its German-born creator, Joseph Pilates. But in the vein of similar nouns referring to exercise, such as aerobics and calisthenics, Pilates encourages a plural reading, and consequently a desire to make it singular:

The German startup created a VR exercise system for gyms and home use in 2015. The fitness system lets users workout in a pilate-like position through a reality that makes them feel like they are flying or deep-ocean diving.
— Jennifer Kite-Powell, Forbes.com, 24 Jan. 2018

Did you know kudos was never really a plural noun this whole time? Well, kudos to you.