Some Jawn About 'Jawn'

'Jawn' is some kind of amazing jawn.

Regionalisms are a class of words that most speakers think are a quaint relic of a bygone era, a time before national radio and television broadcasts flattened our vocabulary into general American English, when people were born, raised, and buried in the same town. But nothing could be further from the truth. In spite of the fact that we are a society of international TV and widespread population shifts, regionalisms are flourishing and staying stubbornly local.

One shining example is the Philadelphia slang jawn. 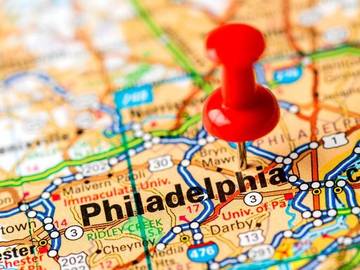 Jawn, pronounced \ˈjän\, is the Philadelphia all-purpose noun. It can refer to a single thing:

or a collection or class of things:

Still reading RAVEN ROCK (it's a 400 page non-fiction. With footnotes and all that fancy jawn).

Hey NYC, 24 Hours til the coolest Jackson Jawn ever. Rocking music from ALL @jacksons (#Rebbie… https://t.co/MTOr4DKpLf

It's even the name of a radio station in Philly. It takes both a standard plural ("gimme one of them jawns") and a zero plural ("gimme them jawn"), and is as Philadelphian as Ben Franklin and throwing snowballs at Santa Claus. But it was, unlike some other notable Philly icons, not Philadelphia born and raised.

Put the snowballs down, Philly. Let us explain.

According to linguists, jawn comes ultimately from the word joint via New York City. Joint is an old word: it dates back to the 1200s and referred initially to the point where two bones meet. This idea of "meeting" eventually led to "joint" being used to refer to disreputable places where criminals met:

The joints—that means the offices where the swindle was carried on—that is a cant word.
— Sessions and Papers of the Central Criminal Court, 1862

Joint in this sense was used of everything from opium dens to illegal saloons, but in time the word underwent semantic bleaching and simply referred to a place. This is the joint recorded by bandleader Cab Calloway in his 1939 Hepcat Dictionary, under the entry for "joint is jumping" (Calloway defines that phrase as "the place is lively").

Joint went on to gain other meanings, but this particular sense of joint to refer to a place (and particularly a place where a party's happening) continued on through the rest of the 20th century until it was adopted and co-opted by hip-hop. In early hip-hop and rap, joint underwent further semantic bleaching and came to refer not to a place, but generally to a thing:

This sense of joint quickly spread among hip-hop fans up and down the east coast—including Philly. And this is where the story goes jawn-ward.

William Labov, a linguist at the University of Pennsylvania interested in dialects, began making field recordings of Philadelphians back in the 1970s. These recordings eventually turned into an important sociolinguistic corpus—and also help us pinpoint the development of jawn from joint. A recording taken in 1981 of a young black man from West Philly has him using the word joint (which came, again, from New York hip-hop), but in a broader way than even the hip-hop artists used it. According to Taylor Jones, a PhD student who has researched the origins of jawn and worked with Labov's Philadelphia Neighborhood Corpus, the young man used joint to refer to a bag, a place, women, and his own genitalia. These are uses that joint did not have in New York City. Philadelphia's joint had become its own joint.

But how did joint turn into jawn? It's likely because of the phonetics of Philadelphia, and possibly because the way that the word joint changed as it moved south. The further north you get, the more /oi/ you tend to hear in joint. In Washington DC, this joint sounds more like jaunt; in Memphis, users report the spelling of this particular joint as junt to match its pronunciation. In Philly, that final -t was dropped, giving the city jawn.

But as jawn has gained some national prominence, even showing up in regional ads, some Philadelphians are declaring it dead. "As soon as I heard it in [the movie] Creed," said one Philadelphian Redditor, "I knew that was the final nail in the coffin. National awareness is death for local vernacular."

But not always. If that jawn y'all is any indication, jawn will be in up in this Philly jawn for a while.