Why 'Iterate' and 'Reiterate' Mean the Same Thing

We tell you again and again.

Iterate and reiterate are synonymous meaning "to repeat or do over again." Both words have Latin origins so this is not a case of over-correction in English. In usage however, you will mostly see "reiterate" meaning "to repeat" and the noun form of "iterate," "iteration," meaning "version."

The word reiterate means "to state or do over again or repeatedly sometimes with wearying effect." It's used often by those quoted in the media who double down on something said previously:

Reiterating a position it has held for decades, the Mayor and Council this week passed a resolution in opposition to proposed offshore oil and gas drilling and exploration off the resort coast.
— Shawn Soper, The Maryland Coast Dispatch, 21 Feb. 2018

Iterate is already defined as "to say or do again or again and again." That meaning is established by its origin: it derives from a Latin verb (iterare) that is related to the Latin adverb iterum, meaning "again."

The shops show the same standardized, nationally advertised wares; the newspapers of sections three thousand miles apart have the same "syndicated features"; the boy in Arkansas displays just such a flamboyant ready-made suit as is found on just such a boy in Delaware, both of them iterate the same slang phrases from the same sporting-pages ....
— Sinclair Lewis, Main Street, 1920

So if to iterate is to repeat oneself, how does reiterate fit in, since re- already means something is being done again (as in rewash or reheat)? 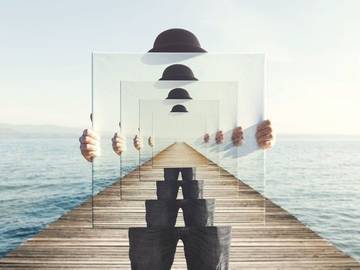 We'll try not to go on and on and on.

Iterate and Reiterate Both Have Old Origins

It might seem like English took the liberty of adding a repetitive prefix to a stem that didn't need it, perhaps to make iterate resemble the more familiar repeat. But the overlap between iterate and reiterate is actually part of both words' Latin heritage. Attaching the re- prefix to iterare gave Latin reiterare, the ancestor of reiterate.

The seemingly unnecessary nature of reiterate has led some usage commentators to try to force a distinction between the two. Charles Einstein, in How to Communicate (1985) insists, "If you've said something once and you now say it again, you aren't reiterating. You're iterating. From the third time on, you're reiterating."

Actual usage does not establish a pattern of such distinction, though reiterate does often come with a contextual hint that the action is a repeated one:

"And are you glad to see me?" asked she, reiterating her former question, and pleased to detect the faint dawn of a smile.
— Emily Brontë, Wuthering Heights, 1847

Iterate is not used often in its own right, apart from cases where it is used, often in a facetious manner, alongside reiterate:

He iterates and reiterates that his lab likewise provided the French with many biological tools and samples, as well as significant technical guidance …
— Natalie Angier, The New York Times Book Review, 24 Mar. 1991

You're much more likely to encounter its noun form iteration as a word meaning "version":

Macbeth is back in its fiercest iteration (and that is saying something given some of its predecessors) thanks to Michael Fassbender's coruscating performance in the title role.
— Melissa Holbrook Pierson, Slate, 10 Dec. 2015

So, again: to iterate is to reiterate and it's all Latin's fault.

Yes, iterate and reiterate share meanings that are largely synonymous. No, this doesn't mean one of them is wrong. Yes, other English words do this (see habitable & inhabitable if you don't believe us). No, it doesn't mean that we are sanctioning the improper use of English.