Is 'bookworm' positive or negative?

Are bookworms devoted or addicted?

What is a bookworm, anyway? The most literal meaning of bookworm is also its least common one: a bookworm is the larva of an insect that causes damage to books. Not so literally, a bookworm is a voracious reader of books. The entomological word can refer to one of several insects, especially the drugstore beetle and the cigarette beetle. These creatures like to dine on bookbinder's paste, bindings, and the leaves of books. Bookworm is, however, not so specific as to refer to just one insect family; the larvae of the spider beetle (of the Ptinidae family) and of certain moths, like the brown house moth, have also been referred to as bookworms. 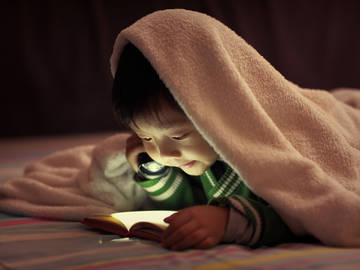 Nowadays no one is likely to refer to any of these larvae as bookworms, least of all entomologists. If you happen to hear an entomologist referring to book lice, he or she is talking about another bug altogether. The sole bookworm today is the human bookworm—and the way the word is used has changed over time.

The figurative bookworm began its career as an insult, a wholly negative term for someone who reads too much. The worm in that epithet for the constant reader does not refer to larvae or the earthworm, as some children's library posters might have you believe, and does not allude to the figurative devouring of books. Rather, the sense of worm being used is the one applied to a human being who is an object of contempt, and since Elizabethan times, the human bookworm has been looked upon with varying degrees of disapproval.

17th-century dramatist Ben Jonson, for example, wrote of a "whore-son bookworm," and in a 1717 letter describing his arrival at Oxford, poet Alexander Pope confessed to wanting "nothing but a black Gown and a Salary, to be as meer a Bookworm as any there." In his novel Pelham, Edward Bulwer-Lytton confirms that the disdain for the bookworm was carried into the 19th century:

Your uncle is a very good man, but he does not make his house pleasant; and I have, lately, been very much afraid that he should convert you into a mere bookworm....

Needless to say, the self-absorbed, idle bookworm was not esteemed in a society based on one's gains and accomplishments.

When it came around to defining bookworm, Noah Webster—from the lexicographer's objective lens—did not see the societal worm but a person with an addiction to reading. He saw the bookworm as being "attached to books" and, explicitly, "addicted to study." He also questioned the bookworm's taste—according to Webster, a bookworm was addicted to the act of reading, and didn't necessarily care what was read (a bookworm was exactly the sort of person who might, for example, read the dictionary).

BOOKWORM, n. A student closely attached to books, or addicted to study; also, a reader without judgment.

Perhaps Webster was on to something in his choice of words. Perhaps some bookworms are pathological and should be diagnosed with a book addiction disorder. If so, however, another word should be used to describe them, because our definition of bookworm has shifted.

Today, bookworm isn't considered to be nearly as negative a term as it once was. For some people, "bookworm" is a brand: there is an entire cottage industry of bookworm-themed merchandise and media. One can buy a "Professional Bookworm" t-shirt or a "My Patronus is a Bookworm" coffee mug. There are bookworm necklaces and bookworm Halloween costumes, and you can even get a bookworm tattoo. Our current definition reflects this shift in meaning: we've replaced addicted with devoted, and our definition mentions an unusualness in behavior.

bookworm noun : a person unusually devoted to reading and study

Initially, that unusualness led people to regard the constant reader as a worm. Today, that quality defines the bookworm's devotion to reading and study.

No matter how you feel about the word bookworm, we hope you'll consider reading the dictionary—even if you don't devour it cover to cover.