What if you read a dictionary cover to cover? How would it change you?

Jack Lynch is a professor of English at Rutgers University-Newark who specializes in English literature of the eighteenth century and the history of the English language. He is the author of several books, including The Lexicographer's Dilemma: The Evolution of "Proper" English, from Shakespeare to South Park, Becoming Shakespeare: The Unlikely Afterlife that Turned a Provincial Playwright into the Bard, and, most recently, You Could Look it Up: The Reference Shelf from Ancient Babylon to Wikipedia, from which this excerpt is taken.

I have defined a reference book as one nobody reads from start to finish. The thought of reading a dictionary or encyclopedia strikes many as the height of absurdity, an emblem of futility. Business writer George S. Day, a professor at the Wharton School of Business, offers advice on “Converting Information into Strategic Knowledge,” and begins by warning executives that “Simply packing the shared knowledge base with undigested information is about as useful as reading an encyclopedia cover to cover.” Are You a Geek? asks Tim Collins, offering 103 Ways to Find Out. One of the signs: “You’ve read a dictionary cover to cover for pleasure.” (Worse still: “It was an Elvish or Klingon dictionary.”) And yet some people, not all of them geeks, have read dictionaries and encyclopedias from cover to cover—or, since many of these works are in multiple volumes, from cover to cover to cover to cover to cover to cover . . . . Some people have to read them. When Robert Burchfield was commissioned to supplement the Oxford English Dictionary, he began by reading the whole thing through—all thirteen volumes, all 15,490 pages, all 1,827,306 quotations, all 178 miles of type. It is more text than many people will read in a lifetime, but the only way Burchfield could prepare himself to be editor. 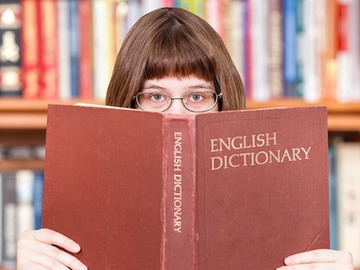 A reference book is "one nobody reads from start to finish." But many people do read dictionaries.

Others read dictionaries and encyclopedias when they have time on their hands. George Eliot’s Lydgate, for instance, was such a passionate reader that he would go through “any sort of book that he could lay his hands on: if it were Rasselas or Gulliver, so much the better, but Bailey’s Dictionary would do.” And Bertolt Brecht, in his Threepenny Novel, wrote of the ridiculous George Fewkoombey, who amuses himself with a tattered volume of the Encyclopaedia Britannica he found in a lavatory.

Others have even more time—time that has been forced upon them. When Nicolas Fréret, an eighteenth-century French scholar, was confined in the Bastille, he “was permitted only to have Bayle for his companion”—Pierre Bayle’s Dictionnaire historique et critique. Two centuries later, while Malcolm X sat in prison, he too read a dictionary. Frustrated by his limited vocabulary—“Every book I picked up had sentences that contained anywhere from one to nearly all the words that might as well have been in Chinese”—he resolved to do something about it. “I saw that the best thing I could do was get hold of a dictionary.” After two days of “riffling uncertainly through the dictionary’s pages,” he

began copying. In my slow, painstaking, ragged handwriting, I copied into my tablet everything printed on that first page, down to the punctuation marks.

I believe it took me a day. Then, aloud, I read back, to myself, everything I’d written on the tablet. Over and over, aloud, to myself, I read my own handwriting.

The next day he moved on to the next page, and before he knew it he had reached the end of the letter A and the end of his notebook. Rather than stopping, he found another tablet and kept going. “That was the way,” he wrote, “I started copying what eventually became the entire dictionary.”

And some read dictionaries for the intellectual challenge. Historian William Robertson, a friend of Samuel Johnson, was a fan of his largest book; Johnson was “pleased . . . to be told by Dr. Robertson, that he had read his Dictionary twice over.” When the young Robert Browning “was definitely to adopt literature as his profession,” wrote a nineteenth-century biographer, “he qualified himself for it by reading and digesting the whole of Johnson’s Dictionary.” Later he told James Murray that he planned to do the same with the Oxford English Dictionary—but Browning died not long after A was published.

Many great writers have been great readers of reference books. Walt Whitman was “an avid reader of dictionaries, which he realized were the compost heap of all English-language literature, the place where all the elements of literature, broken down, were preserved. . . . The nation’s unwritten poems lay dormant in that massive heap of words.” Leo Tolstoy loved encyclopedias, and his diary included a resolution in February 1851: “To rise at 9; to occupy myself with the Encyclopædia of Law”—Constantine Alexeyevich Nevolin’s Encyclopædia of Jurisprudence, which he read every morning from eight until noon, and again from six until nightfall. His letters and diaries are full of dictionaries, encyclopedias, and Greek lexicons. Beat poet Lawrence Ferlinghetti “went through Webster’s Unabridged Dictionary, cover to cover, with particular attention to etymologies.” No reader of Jorge Luis Borges, creator of the fantastic “Chinese encyclopedia” called Celestial Empire of Benevolent Knowledge, will be surprised by his reminiscence of reading Britannica and “the German encyclopedias of Brockhaus or of Meyer” when he was a child, and Vladimir Nabokov kept a dictionary on his bedside table, passing insomniac nights by turning its pages. Aldous Huxley was another Britannica reader; he took a complete twelfth edition with him on holiday. Bertrand Russell recalled, “It was the only book that ever influenced Huxley. You could always tell by his conversation which volume he’d been reading. One day it would be Alps, Andes and Apennines, and the next it would be the Himalayas and the Hippocratic Oath.’” Even young Bill Gates read the 1960 edition of The World Book Encyclopedia nearly all the way through, and Wikipedia co-founder Jimmy Wales fondly remembers reading his parents’ copy of World Book.

A few readers have simply been curious to the point of masochism, and have read for the sake of reading. The Encyclopaedia Britannica office routinely received letters along the lines of “Dear Sir, You will be interested to know that I have just finished reading every word in all the 24 volumes of the Britannica. I believe I am the first person who has ever done this.” Making clear the magnitude of that task, A. J. Jacobs read the complete Britannica in a single year, and reported on the experience in his book The Know-It-All. When the parcel arrived, Jacobs was overwhelmed by

To put 44 million words in perspective, War and Peace is only around 560,000 words, Shakespeare’s collected works weigh in at 900,000 words, and you could read from Genesis to Revelation fifty-three times in a row in the time it would take you to read Britannica. As Jacobs immersed himself in the text, “the mind-blowing diversity of everything” made the biggest impression. “It’s the perfect book for someone like me,” he wrote, “who grew up with Peter Gabriel videos, who has the attention span of a gnat on methamphetamines. Each essay is a bite-sized nugget. Bored with Abilene, Texas? Here comes abolitionism. Tired of that? Not to worry, the Abominable Snowman’s lurking right around the corner.”

Writer Ammon Shea performed a similar experiment with the Oxford English Dictionary, pointing out, “If you were to sit down and force yourself to read the whole thing over the course of several months, three things would likely happen: you would learn a great number of new words, your eyesight would suffer considerably, and your mind would most definitely slip a notch.” He offered his book-length account of his efforts as “the thinking person’s CliffsNotes to the greatest dictionary in the world,” but had to admit it is also “an account of the pain, headache, and loss of sanity that comes from spending months and months searching through this mammoth and formidable dictionary—and pulling together all of its most beautiful and remarkable words.”