The answer to this question is usually yes

There are a good number of words in English that have come from comics. These include such specimens as shazam (from the Captain marvel strip), sad sack (from George Baker’s comic of the same name), and brainiac (from the name of a Superman villain who debuted in Action Comics in the 1950s). Brainiac was hardly the only, or best known, word to have come from Superman; the comic is also the source of the word kryptonite. 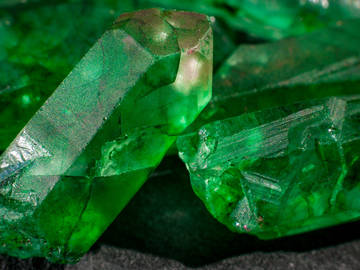 Like 'brainiac', 'shazam', and 'sad sack', the word 'kryptonite' comes to us from comic books.

In its initial sense, Kryptonite referred to a mineral from the planet Krypton which had an extremely harmful effect on Superman. It has also taken on a figurative sense, in which it is used to denote a person’s weakness in a particular area, or susceptibility to being overcome by a specific thing.

Many of the words in our language existed in spoken form for some indeterminate length of time before being committed to print, and so it can be difficult to tell exactly when they began being used. Although kryptonite was in spoken use before being used in published text, we have a pretty good idea of when it began being used, as it occurred during a radio show featuring Superman that was listened to by large numbers of people, and the Oxford English Dictionary has helpfully made a transcript of the episode in which the word makes its appearance.

I watched Dr. Whistler put that meteor through 101 tests... Finally he told me what that meteor is... The name of that meteor is kryptonite.
—Adventures of Superman, (transcript, O.E.D. archive) 1943

The word did not appear in the written form of the Superman comics until 1949, but was used in print in newspapers shortly after its radio appearance.

Reconversion is here on the air as well as in industry, especially in “Superman” … So now he’s set to do thing with Kryptonite, more powerful than Uranium, with the problems of establishing peace in the world uppermost in his mind.
Virginia Vale, The McHenry Plaindealer (McHenry, IL), 4 Oct. 1945

When did we begin using kryptonite in this figurative manner? It’s a bit difficult to tell, since the word was frequently used jocularly.

Superman Bud Collyer, not having any other mode of transportation available and plumb out of kryptonite, had to stay in New York because he couldn’t reach his home in New Jersey.
The Weekly Kansas City Star (Kansas City, MO), 12 Jun. 1946

Given that the above citation appears to use kryptonite in a context that is removed from the classic fictional universe inhabited by Superman it could appear to be a figurative use of the word. However, Bud Collyer was actually Superman (he was the actor who portrayed him in radio serials at the time), and so this likely wouldn’t qualify as figurative use.

However, by the 1960s the word can clearly be found used in a sense that is independent of Superman, and is well on its way to having entered our lexicon.

Bouknight’s piece of kryptonite came in the form of a single with the bases loaded that snapped Hicks’ scoreless streak at 40.
—The Shreveport Times (Shreveport, LA), 6 Jul. 1965

As kryptonite takes on this broadened use, and is increasingly used to refer to the weakness of someone other than Superman, it mirrors the movement of a word that is often given as its synonym: Achilles’ heel. And while Achilles and his heel have been around for thousands of years, it was not until the early 19th century that we got around to using this with the meaning of “a vulnerable point.”

The New Haven Register touches the Abolition in the District of Columbia—which is to be the Achilles’ heel of the party—and contends, that Congress ought never to meddle with it, until the People of the District themselves call for it.
—Enquirer (Richmond, VA), 2 Oct. 1835