in stories
: a substance that causes the comic-book character Superman to become weak when he is exposed to it

Note: In Superman stories, kryptonite in its most familiar form is a green mineral that originated as part of Superman's home planet of Krypton and that falls to Earth as a meteorite.

Superman tended to get more bummed out by Kryptonite than by anything going on in Clark Kent's life …— Tom Russo —often used to describe something likened to kryptonite in causing someone's weakness, failure, etc. In his career Thome has hit less than .240 against lefties. Lefthanded power pitching is Thome's Kryptonite …— Joe PosnanskiIronic people always dissolve when confronted with earnestness, it's their kryptonite.— Gillian Flynn"Thin people know they need to either limit exposure to certain foods that trigger appetite or limit the quantity or frequency of those foods," says Gullo, whose personal kryptonite is pizza.— Lorie ParchEffortlessly good-looking, he was also a talented writer—that combo was my kryptonite.— Taylor Orci

First Known Use of kryptonite

History and Etymology for kryptonite

The first known use of kryptonite was in 1943 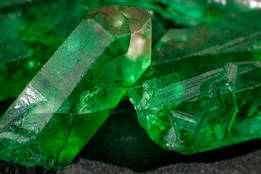 The answer to this question is usually yes