'Between You and I'

Don't let this phrase stand between you and clear writing

If you say "between you and I", I pretty much want to punch you in the face.

Loving my new app that makes people who say "Between you and I" run into the middle of the street and try to kiss a moving bus.

What is it about “between you and I” that engenders such ire? The short answer is that the speaker is using the subjective pronoun I after a preposition, rather than the objective me, and modern English grammar dictates that pronouns that follow a preposition such as between should be objective ones (me, you, us, him/her, it, them). 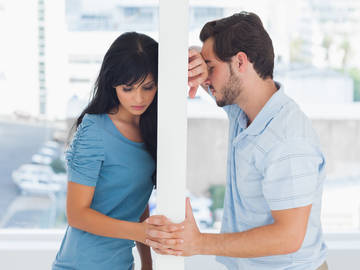 Many writers have used "between you and I" in their writing; however, most current usage guides will censure you if you use it. It's fine for casual speech, but should be avoided in edited prose.

The longer answer? Some people have suggested that the reason “between you and I” bothers so many people is that it is a hypercorrection (a grammatical error made through the attempt to avoid a different grammatical error, or an error made in an attempt to sound more educated), and hypercorrections tend to make people excessively wroth. This theory is largely based on the notion that people were spooked by being told that they should say “it is I,” rather than “it is me,” and so overcompensated by salting their language overmuch with the subjective I. Other commentators on language have opined that some people use I instead of me because it has a more pleasant sound to it.

Perhaps the most famous (mis)use of “between you and I” occurs in William Shakespeare’s The Merchant of Venice, in which Antonio informs Bassanio in a letter that “all debts are cleared between you and I.” Shakespeare was but one of many writers of yore who employed the subjective rather than the objective case in this prepositional phrase. An 1878 issue of the journal Notes and Queries stated that “Between you and I is as thick and plentiful as the autumnal leaves that strow the brooks in Vallambrosa," and offered the following examples (among many others).

Between you and I, I think him as odd … a fellow as you can do.
—Henry Fielding, The Virgin Unmasked, 1791

Whimsical … and, between you and I, none of the mildest of her sex.
—David Garrick, The Lying Valet, 1741

Then the music—so softly the cadences die,
So divinely, O Dolly, between you and I,
It’s as well for my peace that there’s nobody nigh.
—Thomas Moore, The Fudge Family in Paris, 1818

“Between you and I” was not only used by British authors; it may be found in the writing of numerous American men and women of letters in the 18th and 19th centuries. Benjamin Franklin used it occasionally in his correspondence (although he wrote “between you and me” more frequently).

Indeed I had not the least Idea of any Agreement between you and I, either express’d or imply’d as you say, in any of its Articles….
—Benjamin Franklin, letter to David Hall, 14 Apr., 1767

Between you and I, the late Measures have been, I suspect, very much the King’s own, and he has in some Cases a great Share of what his Friends call Firmness.
—Benjamin Franklin, letter to William Franklin, 14 Jul., 1773

There is no doubt that “between you and I” violates traditional rules of grammar. If one were to substitute a different subjective pronoun after between (“this is a matter between they”) it would sound quite jarring to most of us. But there is also no doubt that our language will occasionally assimilate incorrect usage, and over the course of time, come to accept it, if only begrudgingly and slowly. An example of this may be found in the aforementioned phrase “it is me,” which was widely censured in the 19th century, and now bothers far fewer people than it used to. An early 20th century edition of Merriam-Webster’s New Unabridged Dictionary wrote of “it is me” that is “violates the grammatical rule of construction which calls for a predicate nominative after is; and it is now chiefly colloquial or dialect, but is justified by some good writers as being historically idiomatic.” Although using “it is me” instead of “it is I” may still bother some people, many usage guides now accept this as correct, especially in informal settings.

This is not yet the case with “between you and I.” Most current usage guides (as well as many angry people on Twitter) are of the opinion that this usage diminishes the appearance of the user. Our own usage guide takes a somewhat more accepting position:

You are probably safe in retaining between you and I in your casual speech, if it exists there naturally, and you would be true to life in placing it in the mouths of fictional characters. But you had better avoid it in essays and other works of a discursive nature. It seems to have no place in modern edited prose.
Merriam-Webster’s Dictionary of English Usage, 1994

For those who have short attention spans, here is a tl;dr limerick:

In the event that you wish to know why
You shouldn’t say it’s “between you and I,”
When this case is subjective
Instead of objective
You are making grammarians cry