How English Grew Its 'Mustache'

A common word, but only by a whisker

Some of the great questions in our culture may never be answered to the satisfaction of all. For example: which came first, the chicken or the egg? Is Star Wars better than Star Trek? Is a hot dog a sandwich?

Perhaps we should take collective solace in the knowledge that some pressing questions have in fact been resolved to the satisfaction of the English-speaking world—instances in which we have, in effect, voted with our words, whether knowingly or not. 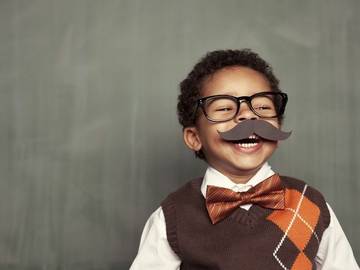 Who is that mysterious mustachioed gentleman?

Such a question is the once-burning issue of whether to consider the hair grown on the upper lip of a man a singular entity or something essentially and eternally split in two by the nose (or, if you’re inclined to use the specific anatomical term for the vertical groove of the upper lip, the philtrum). In other words: is mustache, linguistically speaking, properly singular or plural?

The word, like many Renaissance fashions, began in Italy. The English forms also showed the influence of the Spanish and French words with the same meaning, which were themselves based on the Italian word. It began appearing in English contexts in the mid-1500s with various Italianate spellings such as that used in the famous Italian-English bilingual dictionary by John Florio from 1598, which shows mostaccio rendered in English as mostacho. The spelling of the English term was far from settled, however, and various versions of the word were used in that era:

…and, now I think on't, going to the execution, a fellow met me with a muschatoes like a raven's wing
— Christopher Marlowe, The Jew of Malta, 1589

His crow-black muchatoes were almost half an ell from one end to the other.
— Thomas Middleton, The Black Book, 1604

One thing that is notable about these early uses is that the plural is frequently used, even when the spelling is closer to the French moustache:

…they shaue all their berde except the mustaches
— Thomas Hariot, A briefe and true report of the new found land of Virginia, 1590

…their heads shorne, and their beards shauen all but the vpper lippe, which grew with long mustaches
— John Speed, The history of Great Britaine under the conquests of ye Romans, Saxons, Danes and Normans, 1611

Just as there was no consensus on spelling, there was no contemporaneous agreement about whether an individual possesses two mustaches or one. In another bilingual dictionary of the period, the Spanish word is presented as plural but the English word as singular:

the Mustache, or that part of the beard which is on the vpper lip, vide Bigóte, Mostáchos.
— Richard Perceval, A dictionarie in Spanish and English, 1599

No less a writer than Shakespeare used the word in the singular (and note that excrement is here used in a now-obsolete sense meaning “outgrowth”):

…for I must tell thee, it will please his grace, by the world, sometime to lean upon my poor shoulder, and with his royal finger thus dally with my excrement, with my mustachio
— William Shakespeare, Love’s Labour’s Lost, 1598

The plural use allowed for a parallel with whiskers as a way to refer the long projecting bristles growing near the mouth of a cat:

Mustache is no longer used in this way in English, though in modern French, moustaches is still used to refer to a cat’s whiskers.

It may well be because of the example of whiskers that mustache was considered a plural for so long; they were, after all, synonymous terms, so why not also be parallel in form as well as meaning? The entry in Boyer’s French-English dictionary from 1699 for mustaches is for the plural only, but helpfully offers a synyonym:

Indeed, the influential Dictionary of the English Language by Samuel Johnson from 1755 also connects the two terms:

Noah Webster’s entry from 1828 was strikingly similar, but without whiskers as a synonym:

The battle between plural and singular usage wasn’t the only one being waged in the language over this word: the French-derived spelling mustaches had enduring competition from the Italian- and Spanish-derived mustachios, which was still in active use despite being ignored by the famous dictionaries. Charles Dickens used mustachios in Oliver Twist in 1839.

In Middlemarch by George Eliot, published in 1871, it was the modern mustache, and Arthur Conan Doyle, himself a possessor of a formidable adornment on his upper lip, used the spelling moustache in the singular, in the 1890s. A period of transition can be observed in the choice of Agatha Christie to use both the singular and the plural in her Hercule Poirot novels, many of which were written in the 1920s and 1930s.

There seemed to be a settling of usage by the late 19th century: the French-derived mustache or moustache (which has become the preferred spelling in British English) for generic references to masculine upper-lip growths, and mustachios or, less commonly, the singular mustachio, when special emphasis on the size or grooming is made:

“A lot of supervillains with updates on the waxed mustachios.”
— James Schamus, quoted in Entertainment Weekly, June 2003

And, though mustache has become the standard term, the adjective with the meaning “having a mustache” is evenly split between mustached and mustachioed, with the latter clearly the choice for writers who wish to show the same special emphasis that mustachios provides:

All the while, the Colorado secondary did its part to keep the Cougars' well mustachioed quarterback, graduate transfer Gardner Minshew, from settling in.
— Kyle Newman, The Denver Sun, 11 November 2018

All of which is to say that it took English a very long time to settle on what to call the outgrowth of hair on a man’s upper lip. A sign of how unstable this word has been is that the entry in our Unabridged Dictionary showed that moustache was the preferred spelling for American English as late as 1961. The intersection and overlapping of forms and spellings have settled fairly recently, making mustache (or moustache), finally, a stable term in contemporary usage, but only by a whisker.