Forty is the proper spelling of the number in all English variants despite the fact that four contains a u. Often people will believe that fourty is a British variant like colour but this is also false.

Hello, everyone. We have an announcement. We are pleased/sorry to report that there is never a u in forty.

That's right: the word for the number 4 is four, but ten times that is 40, which is spelled forty. This is true in all of the vast English language, despite rumors that users of British English like the word to resemble colour (they don't), and despite the frequent appearances of the misspelling out and about. 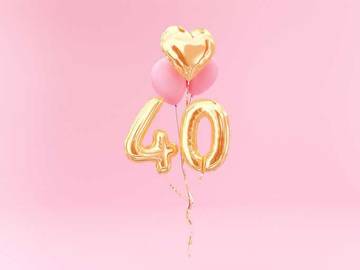 Read on for a look at its many spellings throughout the ages.

In related facts, the number 14 keeps the u: it's written as fourteen. But fortieth correlates to forty, so it too goes without a u.

There is no good explanation for why forty lacks a u that its near-relation four has. Forty simply is, as American English Spelling author D.W. Cummings calls it, an "ill-formed but accepted spelling." It is, however, also a relatively new spelling.

While the word forty dates back to the language's earliest incarnation, it had many varied spellings over the centuries, and the current spelling forty dates only to the 16th century. The Oxford English Dictionary includes a number of spellings that predate that one. From Old English (English as it existed from the 7th century to around 1100) there are the following:

But things really got going in Middle English—English as it existed between the 12th and 15th centuries. In texts from that period the OED notes the following spellings:

Modern English brought us other options:

The winner, of course, is forty, nearly the last of the bunch. The logical Middle English relic fourty, hiding most of the way down that long list, lasted until the 18th century, when for reasons unknown it fell out of use. Sometimes that's just how it goes in English.