Is 'Conversate' a Real Word?

Although scorned by many, conversate has been in regular use for over 200 years

Conversate has the power to upset a great many people, if the hundreds of comments left by users of this dictionary under the word’s entry are any indication. One of the reasons it annoys people is because conversate is a back-formation, a type of word made by removing a portion of an existing word (such as the suffix). Thus, escalate was formed by shortening escalator; televise comes from television, and donate was made from donation. There are many hundreds of words in English made this way, but some people will forever look askance at words such as liaise (formed by back-formation from liaison). 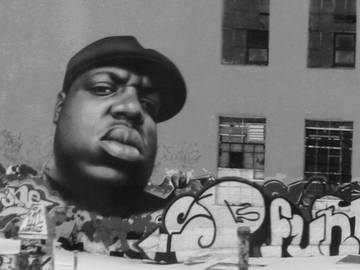 Photo: The Notorious B.I.G., Queens, detail of a photograph by Reporter d'ailleurs CC

Conversate for a few, cause in a few, we gon' do What we came to do, ain't that right boo —Notorious B.I.G. "Big Poppa"

Conversate also upsets some people because it's most frequently used in song lyrics, particularly rap and hip-hop lyrics—as in the Case lyric "Tell me can we conversate/So we can get to learn each other" ("Conversate," 2001). In this instance, as in "Conversate for a few, cause in a few, we gon' do/What we came to do, ain't that right boo?" (Notorious B.I.G., "Big Poppa," 1994), conversate seems to be chosen in part because it's considered nonstandard: it's more striking and surprising than "standard" English, and it has a more dramatic effect. Much of the reaction against conversate involves accusations that it's "not a real word" because people get it from music—or that it's "not a real word" because it's rooted in African-American slang.

Yet conversate is not a product of rap music, and the earliest examples of its use seem regional, not racial. The word has been in fairly consistent written use for over 200 years. The earliest known citation is currently from 1811:

The next day, being the twenty-eighth day of the ninth month, 1782, they arrived at Byberry, the place of their nativity, and the residence of their nearest connexions and friends, where Elizabeth and her children were once more favoured with the agreeable opportunity of seeing and conversating with her ancient mother, together with their other nearest relatives and friends, to their mutual joy and satisfaction; under which happy circumstances we now leave them.
—Archibald Loudon, A Selection of Some of the Most Interesting Narratives, 1811

The word appears next in 1829, in the North-Carolina Free Press: “I love to conversate with wise men on any sorter ticks, more espesially pollyticks.” Although many of the uses of conversate in the beginning and middle of the 19th century are obvious attempts to reproduce language that would be thought of as dialectical or uneducated, they do not appear to be specific to any ethnicity. An article from the Southern Orator in 1853, titled Burlesque of Electioneering Political Speeches, contains the line “The first and most important subject which I shall conversate on, is the election subject.”

As the word continued to be used in the latter portion of the 19th century, it still was employed to ostensibly reproduce a dialect, but now mainly in attempts to parody African-American vernacular speech. At the same time, however, examples of the verb form conversating may occasionally be found in formal writing as an apparent substitution for conversing (“The President sat in a front compartment conversating with Secretary Long…” The Charlotte News, Sept. 16, 1901).

Given that the written use of a word is generally found some amount of time after it has already been in spoken use, we can be fairly safe in assuming that conversate has had some currency in English for over two centuries now. The inclusion of this word in a dictionary, like the inclusion of other dialectical words popularized by music or poetry, is not an argument for its acceptance: it's a recognition of the fact that it exists.