Button up that vest

You might think that the maxim “dress for success” is the kind of tidy phrase that serves as a shorthand for general, unquestioned, but ultimately shallow wisdom. But the connection of clothing and money—as in, a specific outfit that brings a salary along with it—is literally the origin of the word investment. 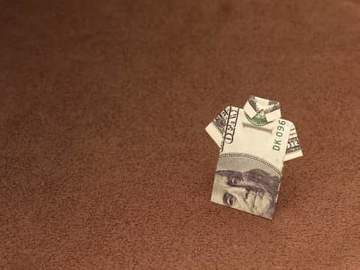 Hope you don't lose your shirt on it.

The Meanings of 'Vest'

It’s right there, hiding in plain sight: the vest in investment. The oldest use of vest in English referred to a “robe” or “gown,” such as those worn in ancient Greece and Rome—logical enough, since the ultimate root of vest is the Latin word vestis (“garment”). The word traveled the Renaissance route from Italian (vesta) to French (veste) to English in the early 1600s. Its modern meaning, “a sleeveless garment for the upper body usually worn over a shirt,” was in use by the late 1600s.

Vest is also a verb in English, but a funny thing happened in the Middle Ages to this Latin-based word: it jumped in meaning from simply “to clothe” to the more bureaucratic definition of “to give (someone) the legal right or power to do something or to own land or property.” This meaning solidifies a metaphorical use of “to vest” in Latin that was closer to “to surround” or “to adorn,” as in: “adorned with the robes of office.” The official robes worn by clergy were the symbols of their positions and, perhaps unsurprisingly, called vestments. Wearing these clothes was a public claim on power, salary, and status.

This is why we sometimes hear the phrase “by the powers vested in me.” The use of vested as an adjective meaning “fully and unconditionally guaranteed as a legal right, benefit, or privilege” (as in “fully vested”) came into the language in the 1700s.

The Origin of 'Invest'

A similar change happened at this time to a parallel verb that entered English about a century later: invest. The Latin verb investire meant “to clothe” or “to surround” (the prefix in- + vestīre meant “to dress,” “to clothe”; the etymology of invest literally means “in clothes”). In Medieval Latin, this verb took on the same specific bureaucratic meaning that vest had acquired, and this meaning was duly transferred to this word’s descendants in French and English. The noun form of this term initially was the Latinate word investiture, with its younger cousin investment arriving more than two centuries later.

This bureaucratic meaning initially coexisted with the literal “to clothe” meaning of invest.

Shakespeare uses the word in both ways:

(“to grant a right or power”) I do invest you jointly with my power (King Lear, I i)

Samuel Johnson’s first definition of invest, from his 1755 dictionary, was:

To dress; to clothe; to array.

The financial meaning of invest entered English from a different source: Italian. In Italian, investire had been used since the 14th century with the meaning “to commit money in order to earn a financial return,” and entered English around 1600 as a new meaning for the existing, French-derived invest. The extended meaning “to make use of for future benefits or advantages” (as in “to invest time or energy in something”) came into use in the mid-1800s.

This overlapping of the development of new meanings in a word with a Latin history isn’t unique to invest: it also happened with quarantine, which was borrowed from French into English with the meaning of “a period of forty days,” only later to have the Italian meaning “isolation as protection from disease” superimposed on the existing form, since the French-derived word (from the French quarantaine) was so similar to the Italian word (quarantena). If any distinction was initially made in English between these words, they soon blended together—the new meaning folded into the familiar existing form.

Sometimes word roots that are borrowed twice end up being slightly different words in English: think of etymologically identical pairs in English vocabulary, like platoon and peloton or isolate and insulate or guarantee and warranty.

Interestingly, the French language split these meanings of invest into two words; the financial meanings became the verb investir and the noun investissement, while the word for “garments” became vêtements. (Also, confusingly, the modern French veste means “jacket” or “coat” instead of the sleeveless garment of its English cognate.)

When we think of investing we usually think of putting our money somewhere. But from an etymological point of view, we’re putting clothes on our backs.