Inflame typically means "to make angry" or "to excite" and has rarely been used in the literal sense as "to set on fire." While some words gain metaphoric meaning over time, this is an example of a word losing its literal meaning early on.

It’s easy to get the impression that changes in language most often come in the form of newly added meanings to words (cookie and mouse come to mind), but the reverse also happens: meanings can also fall away, something that is surely harder to notice.

Case in point: inflame. It all starts with fire (at least, etymologically and metaphorically speaking). The word inflame and its derivatives like inflammation, inflammatory, and inflammable have word roots that are clear, and “in flames,” of course, means “on fire.” 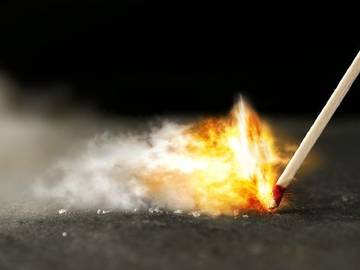 But we don’t use inflame to mean “to set on fire” very often, and if we do encounter it, it seems distinctly archaic. It came to English from the French verb enflamer, and enflame remains a variant spelling. Here is its literal use from the Wycliffe Bible, the Middle English translation that dates from the late 1300s:

The later rendering of the same passage from the Book of Malachi in the King James Bible uses burn instead, showing that the literal use was already falling away by the early 1600s:

and the day that cometh shall burn them up

In fact, inflame has always been more commonly used in figurative ways than in its literal meaning. Early use of the word clearly means “to make angry” or “to enrage”:

be not inflamed wyth angre, hatred or envye against your neighbor
— Thomas Cranmer, Catechismus, 1548

France, I am burned up with inflaming wrath
— Shakespeare, King John, Act III, Scene i

Carrying the metaphor a bit further, inflame became a bit more abstract, taking on the meaning “to intensify,” “to excite,” or “to rouse”:

That have inflamed desire in my breast To taste the fruit of yon celestial tree
— Shakespeare, Pericles, Act I, Scene i

Today, when we encounter the word inflammation, we think of physical discomfort or pain—a medical symptom. Indeed, that’s one way the word has been used for centuries, as early as the 1530s, when Sir Thomas Elyot published a treatise on physical health entitled The castel of helth (“The Castle of Health”), in which he used the term in phrases such as “inflammation of the lunges” and “a soorenesse, a swellynge or an inflammation.” Some medical use of the word from this period can seem strikingly modern:

a swift inflammation of the eye, being redde and moist
— Jacques Guillemeau, A worthy treatise of the eyes, 1587

However, there was also a figurative use of inflammation in the 16th century that has fallen from contemporary use. It was still alive in the 1800s, as shown by its definition from Webster’s dictionary of 1828:

Violent excitement; heat; animosity; turbulence; as an inflammation of the body politic, or of parties.

“Violent excitement” fits well for this instance of the word’s use:

Wherfore the zele & thonour of god / the compassion of Christe / & the inflamacion or kyndelynge of >his owne hert hereunto: be moost properly to be attended & beholden in ye woundes of Christ
— Ulrich Pinder, The myrrour or glasse of Christes passion, 1534

Shakespeare’s use of inflammation makes reference to the “violent excitement” fueled by the liquid courage of alcohol:

They are generally fools and cowards—which some of us should be too, but for inflammation.
— Shakespeare, Henry IV Part 2, Act III, Scene iii

This meaning is even in the King James Bible:

Woe unto them that rise up early in the morning, that they may follow strong drink; that continue until night, till wine inflame them!
— King James Bible, Isaiah 5:12, 1611

Inflammatory is a more recent addition to English, created by using the Latin scientific vocabulary rather coming than from a French word. As such, it has always had a more technical quality. Early use from the 17th century shows consistency with its current meanings: “lascivious and inflammatory books”; “inflammatory diseases.”

Inflammable came from French, but dates from around 1600, much later than inflame. The original Latin-derived French in- means “in” or “with,” but it’s easily confused with the other prefix in- meaning “not” (like un- or non-), which explains why inflammable is sometimes confusingly used to mean “not flammable” instead of the more historical and correct “flammable.”

This confusion exhibits one of the problems with language change: it can seem to make the meaning of a word seem to go up in flames.