Inauguration is all about telling what the future holds—etymologically speaking.

Inaugurate comes from the Latin word inaugurare, which was formed by combining in- with augēre, meaning “to increase.” Augēre is likely the origin of augur, spelled the same in Latin and English, though the path of the word’s development isn’t certain. Either augur originally meant “one who furthers the growth or increase of an enterprise” and subsequently “one who sees favorable omens for success” or the progression could have been “growth or increase owing to the gods’ favor” and subsequently “favorable omen,” with the omen then becoming the word for the person who reads or announces it, making an augur “an official diviner of ancient Rome.” Another related word developed to name the activity of augurs: augury. 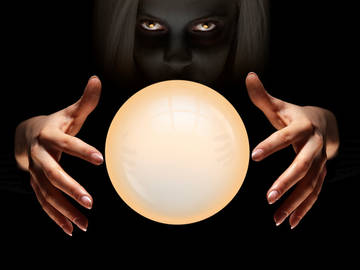 In ancient Rome, the official diviner’s job was to interpret signs and portents before an important undertaking. Their function was not to tell the future, but rather to discover whether or not the gods approved of the action or office before it was undertaken, which is how 'inaugurate' came to mean “to consecrate” or “to install” or “to invest.”

Augēre is also the root of augment.

While inaugurare meant both “to practice augury” and “to consecrate by augury,” referring to the rites connected with reading omens, only the second meaning passed into English with inaugurate. In ancient Rome, the official diviner’s job was to interpret signs and portents before an important undertaking, especially a military or political course of action. Their function was not to tell the future, but rather to discover whether or not the gods approved of the action or office before it was undertaken, which is how inaugurate came to mean “to consecrate” or “to install” or “to invest.”

This meaning, “to induct into office with suitable ceremonies,” goes back to the 1500s in English as both a verb and a noun:

They did inaugurate and confirme, Apollodorus Cizicenus Captaine in warre oftentimes, notwithstanding he was an Allien, and Outlander.
—Claudius Aelian (trans. Abraham Fleming), A Registre of Hystories, 1576

Likewise it is termed an inunction, the annointing of God, whereby we are inaugurated and destrinated to an infallible inheritance certainly reserued in the hands of a strong keeper against that famous day of our redemption.
—John Prime, An Exposition, 1587

A litle after was leo the ffyghe made byshope, and within xl. dayes of his inauguracion, is uery ffrend Christopher cast hym in to pryson.
—John Hooper, An Answer vnto my Lord of Wynthesters Booke, 1547

Yea nothing was he permitted to do to hym self or to his children either in his or theyr inauguration and sanctification to the preesthode, but all was committed to the care of Moses….
—John Knox, The Appellation of Iohn Knoxe, 1558

The main method of augury was the observation of the flight of birds, known as an auspice. For example, when looking for the answer to a question, the augurs would observe the direction of the flight of birds as a good or bad sign. Auspice came to mean “a favorable sign” and “under the auspices of” means “with the help and support of”—reflecting a favorable view of an endeavor.

Inauguration was used from the very beginning with reference to the President of the United States. In a letter written by Alexander Hamilton to the newly elected George Washington in May of 1789, Hamilton reflects on the “etiquette proper to be observed by the President”:

The President to accept no invitations: and to give formal entertainments only twice or four times a year on the anniversaries of important events in the revolution. If twice, the day of the declaration of Independence, and that of the inauguration of the President, which completed the organization of the Constitution, to be preferred; if four times, the day of the treaty of alliance with France & that of the definitive treaty with Britain to be added.

And in a news headline after the event:

In Hamilton’s letter to Washington, he makes it clear that the president of the new country must put equality first among considerations of the actions and demeanor of the president—the inauguration would not be a coronation. And yet, Hamilton addresses Washington as “Your Excellency” in the same letter, keeping the tone high because the occasion was auspicious.