A correspondent wrote to ask us how to spell the abbreviated form of usually that's pronounced like the word's first syllable—as in "I'll have the us(ual)." Let's see what we can do. 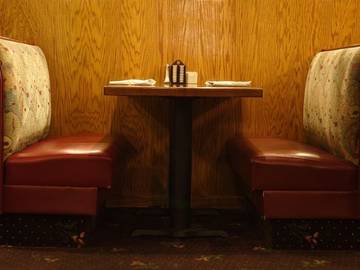 The usual. Like coffee and cherry pie, for instance.

We determine questions like this as we determine everything else: based on evidence. But evidence of a shortened form of the word usual is scant in published, edited text. Word maven and long-time New York Times columnist William Safire chose yoozh in 2009:

That worked for at least one other newspaper as well:

"What's up, Paul, you want the yoozh?" barista Allison Dahl asked as he approached the counter on Friday, meaning did he want his usual.
— Joe Marusak, The Charlotte (North Carolina) Observer, 6 Apr. 2008

But on the other side of the continent two different options seemed right:

"The only place I get 'the usual' is at my hair stylist's," wrote Vince Eberly. "I have been going to the same hair cutter, Tina McGovern, for 25-ish years and have followed her from salon to salon. The conversation always starts with 'the yuzh?' The answer is always yes, and by the end of the session, I always look great."
— Paul Turner, The Spokesman Review (Spokane, Washington), 22 Jan. 2017

Two of these three spellings start with "y," which has the benefit of making it instantly clear to the reader that the word starts with the same sound as the word yes or yet. The initial "u" of the third option has a visual relationship to the word it shortens, which is a plus. However it risks a pronunciation of the initial sound as the same as the initial sound in up or ugh, so there's that.

Of course the consonant sound at the end—technically a post-alveolar fricative—is also not without complication. It appears in a number of words—measure and vision, for example—but it has no simple English spelling. All three of the options above go with the "zh" of the Russian transliteration in Dr. Zhivago. Combining "zh" with the consonant letter that does the work in usual seems reasonable enough too: "szh." And even "j" makes some sense given that its usual sound is a combination of the sound usually made by "d" (an alveolar plosive) and that post-alveolar fricative we're after.

And then there's the vowel: the rounded sound of the first vowel in usual is spelled in various ways in English, including those found in the words boot, glue, and flute.

So many possibilities, and only four published, edited text examples from an enormous database of U.S. newspapers spanning decades. There are no lexicographical conclusions to be drawn on only that.

Friends had suggestions, among them the seemingly reasonable yuzh and uszh, as well as the perhaps more desperate: yujhzse. Some suggested turning to the International Phonetic Alphabet for help, but most of us don't have friends geeky enough to know what "ju:ʒ" sounds like (or to easily have keyboard access to that last character, which is known as ezh).

A former Merriam-Webster lexicographer voted for "usu."—our in-house abbreviation for the term. He pointed out that English-speakers write "oz." but say ounce. We also of course say pound when we write "lb." and feet for "ft." That makes sense if we want to write "usu." and say usual. But if we want to say only the first syllable of that word? Hmm.

Twitter—where being concise counts—seemed worth looking at, for this has indeed been a question Twitter users have asked:

Has anyone decided definitively how to spell the short hand for usual as in as per usual? Ush? Usesh? Yoozh? Yuzh? #TeamYuzh

One of our editors thought a Twitter poll was in order. A poll taker was puzzled by the conundrum:

She wasn't the only one. The poll, which was in three parts, provided the following completely unscientific results: most poll takers preferred that the abbreviation start with "u" rather than "y" (by more than 4 to 1); and more poll takers thought "zh" should be used to spell the final sound than either "j" (by nearly 9 to 1) or "szh" (by 2 to 1). But when it came time to put the results of the first two polls together to find the optimal, most likeable shortened form of the word none of the options did well at all. Hardly anyone liked uezh; only slightly more liked uzhe; and only slightly more than that liked uzh. The overwhelming majority of poll takers chose the fourth option: "They're all too awful."

Oof. So what is a person to do when seized by a desire to write "I'll have the us(ual)"? Welp, we're afraid that the answer is that there is no established shortened form of usual, which means English speakers are really on their own. Our best advice is to use the form that you think best communicates your intended meaning. (Or perhaps print this article, tack it to the wall, and throw a dart; whichever spelling it hits is yours.) Eventually one of the forms will win out, and we'll be watching when it does.