Oh, how good an ice-cold drink is on a hot summer day. Lemonade, limeade, soda/pop/coke. Or, those excellent often-caffeinated (bonus!) standbys, ice tea and ice coffee. 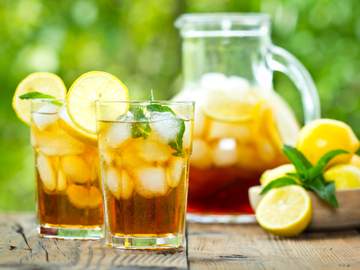 To avoid picnic fights, just ask for a glass of refreshments.

It's true, those are the established forms, and they are the forms that editors throughout the English-speaking world have made sure are dominant in published, edited text. That d in iced tea/coffee is indeed more often than not present in the newspapers and magazines we peruse. But we doubt you actually ever hear it, and the spellings without it are encountered often enough that an investigation into them is worth our time. So grab a cold glass of what pleases you and sit back and read on.

The variants ice tea and ice coffee, have linguistically unremarkable origins. They are predictable variant spellings that accurately reflect the pronunciations that result because of our articulatory anatomy.

It's true. English speakers, when speaking at a regular clip, regularly leave out sounds in everyday words because our tongues (and sometimes lips) can't be bothered—and don't need to be bothered—with the extra effort required to articulate them. In particular we leave out the final /t/ or /d/ at the end of consonant clusters in words like first, left, and found so that in a phrase like "first thing," spoken unselfconsciously in context, the /t/ in first is often completely absent, filled in only mentally by both listener and speaker.

This kind of elision is especially likely to occur when a final /t/ or /d/ is part of a large consonant cluster. We have only to look to the historical record on the styling of a common cold comestible to see the pull of elision clearly. The summer staple known as ice cream was originally iced cream. But iced cream involves a consonant cluster [stkr], which requires an attention to enunciation that is at complete odds with the pleasure derived from the term's referent. That cold and creamy sweet goodness just shouldn't be that hard to pronounce. Hence: ice cream. The elision that occurs in large consonant clusters is also apparent in the term box set as it is used for boxed set. The cluster [ks] is far easier to pronounce than [ksts]. We have elision to thank for other commonly used compounds as well: skim milk was originally skimmed milk (skimmed milk is still in use); wax paper is a commonly used and accepted variant of waxed paper. And who among us can claim to never have asked for whip cream on our pie?

And so it is with the pair that brought us here: pronouncing iced tea and iced coffee without the /t/ heard in the word iced alone is the norm; it's so commonplace as to be unremarkable. So shouldn't writing ice tea and ice coffee also be unremarkable?

Well, sure. Except that it's not. Both iced tea and iced coffee are far more common than their d-less variants, but this may not always be the case, especially if we look beyond American English. While iced tea is more than six times as common as ice tea in the Lexis-Nexis database of US news sources, it is only about two times more common in the Lexis-Nexis database of UK news sources. Also interesting to note is that while tea-giant Lipton uses iced tea on its US site, the company has a site for non-US tea drinkers that opts for ice tea.

Iced tea and iced coffee may eventually go the way of iced cream, which would mean some kicking and screaming (in the style of usage commentators, which is admittedly pretty tame). We have only to note how things changed between Richard Grant White's 1871 Words and Their Uses, Past and Present and Frank Vizetelly's 1906 A Desk-book of Errors in English. While White bemoaned how both ice-water and ice-cream had "[b]y mere carelessness in enunciation … come to be used for iced-water and iced cream," Vizetelly identified both as "so firmly established that it is doubtful if they will ever be changed." A few decades from now we may all be fully expecting ice tea at our lemonade stands.

MORE TO EXPLORE: Is it Expresso or Espresso?