Increasingly, people are using 'heart' as a verb

At first it was a mere symbol: ♥

Earliest Use of "Heart" as a Verb

We can thank the graphic designer Milton Glaser for helping that symbol become a verb. You've probably seen his most famous design, which debuted in 1977 and is credited with revitalizing a city: I ♥ NY. 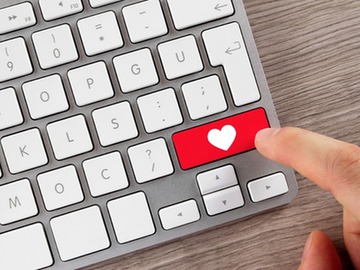 'Heart' didn't really take off until people had easy access to the ♥ symbol on their phones and computers.

In the television ads that went along with the graphic, people said "I love New York," not "I heart New York," but earliest evidence of this use of heart is linked directly to a literal reading of the graphic.

But 1977 was a long time ago, and for most of the intervening years we were not using heart as a verb. In the Merriam-Webster files we have a smattering of evidence of "I heart x" from before this century, but it really wasn't until the current millennium that we started seeing more regular evidence of the use in print.

Popularized Use of Verb "Heart" and ♥

When people refer to the movie today, it's "I Heart Huckabees," and that heart verb doesn't bother us a bit. The symbol that the reviews didn't have the font to reproduce is now available to us on our phones and Internet keyboards. We often read it as "heart," but its meaning is clear: love.

The 79-year-old was diagnosed with stage 4 pancreatic cancer in March of last year. He's been public about his struggles throughout his treatment, receiving an outpouring of love and support from fans. In November, one contestant showed his support when he was unable to answer a question, instead writing "What is…"We [heart] you, Alex!"
— KTVA.com, 5 Jan. 2020