Dictionaries have traditionally avoided defining some compound terms—those formed by combining words—for one major reason: to save precious space on the printed page. Hence, certain terms deemed “self-explanatory,” like orange juice or cattle ranch, are not entries: you can just look up the two words and derive the meanings.

Sometimes, however, you just can’t. Some terms take on meanings that are figurative, and are therefore no longer self-explanatory, like laundry list. Others could never be derived from their constituent parts, like dude ranch. And some have hovered in a gray area for centuries, like human capital. 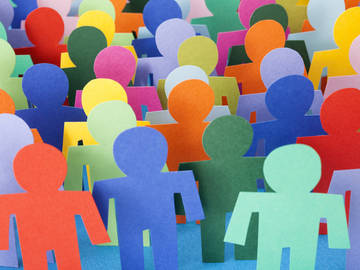 'Human capital' has come to mean something broader than "workforce"

The word capital comes from the Latin word caput, meaning “head,” hence its many derivative meanings, including “the top of a column”—the oldest use of the word in English—and “the seat of government.” The words chief and chef both also derive from caput. As a noun, the non-architectural senses of capital developed first to refer to the tall letters that began sentences, then to the major city of a region, then to the preeminent city for an industry or activity (“the fashion capital”), then finally to a stock of accumulated goods, the value of those goods, net worth, or available money.

From these meanings relating to “value,” a figurative meaning of “advantage” or “gain” developed, as did “a store of useful assets or advantages.” These meanings explain the way capital is used in such phrases as political capital and cultural capital. Human capital is a bit different. The Oxford English Dictionary first records its use in relation to the high mortality rate due to alcoholism of young adults in 18th-century Russia:

In order to simplify in numbers the loss sustained by the country in its human-capital through the means of this pernicious liquor, let us admit, that the mortality, from the fifteenth to the twentieth year, observes the same proportion which holds good in general from birth to the fifteenth year.
—William Tooke, View of the Russian Empire during the reign of Catharine the second, and to the close of the present century, London, 1799

Human capital here would seem to refer to “population” or “healthy population” in a general way, viewing that population as a source of national wealth—a wealth that is assessed in ways that go beyond a statistical measure of labor, earnings, and output. This seems to be how the term was used into the 19th century, as seen in this harsh assessment of the Mexican War:

I believe that this war is a national blunder, a great calamity, the full effects of which, upon the peace and happiness of the country, no human sagacity can foresee. It is becoming an absorbent of a nation’s blood and treasure: a canker to a nation’s repose…And I may ask here, what could not have been accomplished by the United States in her commerce and trade, in the arts and in every element of happiness and prosperity, by the use of vast sums which have and will yet be expended?...Is there no loss in this, to say nothing of the loss of that invaluable, living, human capital, which cannot be restored?
—The Tennessean (Nashville, TN), 10 November 1847

And also here, in the context of a kind of social contract:

The active rich, if they would conceive their position aright, must rise above the purely private point of view, and must regard themselves as discharging a true public function—that of conservators and administrators of human capital.
—The Daily Delta (New Orleans) 25 January 1852

About this time, human capital was also being used in a more impersonal and coldly euphemistic way to mean “labor force”:

He meets with emigrants or slave-traders moving on to Texas with their human capital, to turn them to greater account.
—Sharpe’s London Journal (London), July 1849

Upholstery, and the outlay of human capital, could do no more.
—The Musical World (London), 29 November 1851

Meanwhile, this use of the term, calculating casualties of war, is even colder:

And yet a distinction was growing clear between viewing human beings as statistics and viewing them as individuals:

Unless they took considerations of that kind into account they would not understand what was really meant by a standard of decent living. Human life was of even more importance than human capital.
—Decatur (Illinois) Daily Republican, 11 July 1883

In recent use, human capital continues to be used to mean something broader than simply “labor force” or “workforce”:

Indeed, it can be argued that the U.S. military is already withdrawing from its most significant social mission--that of forming human capital out of kids who otherwise would be a drag on society. "We're going to be smaller and better--we're going to pick and choose our people," says Rear Admiral James Lair, in a typical comment. "I don't have time to be a rehabilitation society. It used to be jail or the service. Now most of these kids are high school graduates.
—Thomas E. Ricks, The Atlantic, January 1993

The reason is that upward mobility requires what sociologists describe as the twin pillars of success: human capital and social capital. Human capital is a person's education, job credentials, and employability. Social capital usually means emotional support and encouragement from a reliable stakeholder in one's life, an asset commonly associated with marriage that is itself a form of wealth.
—Isabel Wilkerson, The New York Times, 12 June 2005

These uses, taking a holistic view of a person’s life and experiences as they can be applied within the workforce, correspond to the way human capital is defined by the Nobel-prize winning economist Gary Becker, who applied the methods of economics to aspects of human behavior previously considered the domain of sociology and demography. His 1964 book on the subject was titled, appropriately enough, Human Capital.

Both the broad and narrow uses of human capital are in use today. Though we might think that terms like human capital management sound like business jargon or a fancy way of saying human resources, in fact, there’s a long—and labored—history to this use.