Is That Plant 'Perennial' or 'Annual'?

We get asked at least once a year

Annual flowers, or annuals, have a lifespan of one year, rather than occurring yearly (as the name might suggest). On the other hand, perennial flowers, or perennials, grow back every spring. Both of these words stem from the Latin root for "year."

Each and every year, as the bleak winter months roll on, aspiring gardeners begin to plan their gardens for the coming year. Choices are made; should one once attempt to grow strawberries, or merely acquiesce to the inevitable supremacy of the zucchini? Is it worth trying to once again defy the seemingly innumerable creatures who gorge on tomatoes? Is this the year to grow flowers in addition to vegetables? 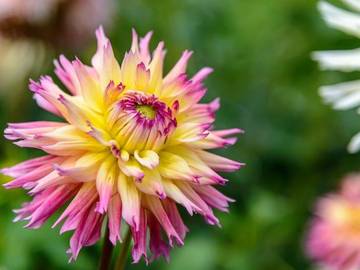 Our research tells us this is a dahlia, and as such it is a perennial.

Which Flowers Grow Back?

For those who do decide to plant flowers there is quickly a decision which needs to be made: should one plant perennials or annuals? Those who are unfamiliar with the difference between such plants, and interested in having flowers that come back every year, may turn to a dictionary in order to make the correct choice. Given that annual may be defined as “occurring or happening every year or once a year,” some number of gardeners will doubtless plant this kind of flower, setting themselves up for years of disappointment and lifeless husks. Because while annual can indeed mean “occurring every year,” that is when it is applied to things like vision exams or holiday parties; when applied to plants, annual means “completing the life cycle in one growing season or single year.”

If you want plants that come back every year (at least until your poor gardening technique manages to kill them off) then you should be planting flowers that are perennial (“persisting for several years usually with new herbaceous growth from a perennating part”).

An annual is a plant that lives and dies in one growing season. A perennial regrows and reblooms year after year. In our busy world, why plant anything but perennials?
— Jeanette Marantos, The Los Angeles Times, 28 Feb. 2020

Yes, annual and perennial share a root (both may be traced to the Latin word for “year,” annus, and the two words have considerable semantic overlap (both may mean “recurrent” in some way), but insofar as they relate to plants they are markedly different.

Both words may also function as nouns; an annual can be a publication occurring yearly, a yearly event, or “something that lasts one year or season (specifically, a plant that completes its growth in one growing season).” A perennial may be a recurrent topic, a continuing question, or “a plant (such as a tree or shrub, or an herb renewing the top growth seasonally) that lives for an indefinite number of years.” The noun form is somewhat more common in reference to gardening choices (perennials or annuals, rather than perennial flowers or annual plants).

History of Annual and Perennial

Annual is the older of the words, in use as both noun and adjective since the 14th century. Perennial came into use in the early 17th century, first as an adjective meaning “lasting indefinitely; impervious to change.”

Sixtly, the creature intends immortality, which while it failes of in the dying or expiring of the particulars of euery sort, it would supply for the preseruation at least of the kindes, by a perenniall substitution of new particulars in euery kinde: and yet loseth all this labour, because all things must be dissolued, and must be restored by another way knowen to God and not now to nature.
— Nicholas Byfield, An exposition upon the Epistle to the Colossians, 1615

As, long or hard want doth sometimes sterue; so the perenniall current of wealth, of peace, or ease, with other outward blessings, doth usually drowne all sense or notion of that goodnesse, whence these and all other good things flow.
— Thomas Jackson, A treatise containing the originall of unbeliefe, misbeliefe, or misperswasions concerning the veritie, unitie, and attributes of the Deitie with directions for rectifying our beliefe or knowledge in the fore-mentioned points, 1625

Similarly to how these earliest uses of perennial mean “everlasting,” the first uses of this word when referring to plants were “evergreen”; later uses included the horticultural sense of “growing anew each year.” The earliest uses of annual were “covering the period of a year” (adjective) and “an event that occurs yearly” (noun); the application of this word to plants that die without your help each year came about the in 17th century.