It’s not as easy as it looks.

The abbreviation Mr. comes from Middle English, where it was the abbreviation of maister, meaning “master.” Master was the original preferred title for young unmarried men, and mister was specific to those who were married, until the former fell out of use and the latter came to apply to both.

Mrs. is the abbreviation for mistress, a word that once mainly referred to the female head of a household. 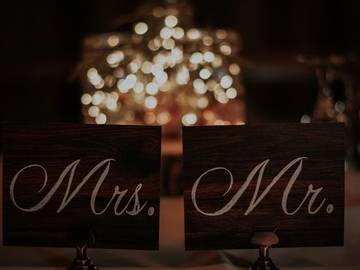 At this point the story becomes much more complicated.

As you might notice any time you’ve filled out your name on a form, these courtesy titles are known as honorifics. Because these titles appear more commonly in their abbreviated form than as whole words, the abbreviations have taken on lives of their own. One question that consequently arises is to how to spell the plural forms of these titles. With other honorifics, you can get away with a standard –s plural, such as “Drs. Smith and Jones.”

But the pattern for Mr. and Mrs. is not as clear. Mr. can be spelled out as Mister and consequently pluralized Misters, but few people do that. For one thing, if you tried to pluralize Mr. with a standard –s, it would almost certainly get confused with the singular honorific Mrs. Similarly, trying to spell out a plural of Mrs. seems like it would induce a headache.

For a long time, these titles were never pluralized. If you wanted to refer to two or more gentlemen, for example, you would just say “Mr. Smith and Mr. Jones.” This is a rare case where the accepted plural form of a word has a separate derivation from its corresponding singular form. Instead of attempting an English plural, we borrowed the abbreviations for the respective titles as they appear in French.

The French noun for Mister is Monsieur, and the noun for what gets abbreviated as Mrs. is Madame. Respectively, they are pluralized as Messieurs and Mesdames.

Therefore, Mr. gets pluralized as Messrs.:

The talks this week followed a temporary trade truce reached by Messrs. Trump and Xi during their meeting in Argentina on Dec. 1.
— Lingling Wei, The Wall Street Journal, 9 Jan. 2019

That minimal aid, in the view of more recent traversers such as Messrs. O’Brady, Rudd and Worsley, disqualified Mr. Ousland’s epic solo jaunt from the laurel of an “unsupported” journey.
— David Roberts, The New York Times, 3 Jan. 2019

The plural of Mrs. shortens Mesdames to Mmes.:

Since the cameo sideline began, she had dressed as Mmes. Carter, Reagan, and Bush; had added Sandra Day O'Connor and Queen Elizabeth as the occasion warranted.
— Elinor Lipman, The Dearly Departed, 2001

The honorific Ms., once reserved for women whose marital status was unknown, is increasingly used of women both married and unmarried when such status is not a factor. The plural form of this abbreviation is Mss. or Mses., and the title Miss , used traditionally for an unmarried girl or woman, is simply pluralized as Misses. In recent years, the honorific Mx. has come to be used as a courtesy title that gives no reference to a person’s gender. There is not enough usage evidence to identify an established plural for Mx., but Mxes. has some currency.