But How Did They Get Their Name?

When did unmanned aircraft become known as drones? It was probably earlier than you think.

Unmanned aerial vehicles were used during World War II as targets for fighters and antiaircraft guns, which had to have something to practice with. These radio-controlled aircraft were called RPVs, or "remotely piloted vehicles," but their military creators and users soon gave up the acronym for something a little more prosaic. 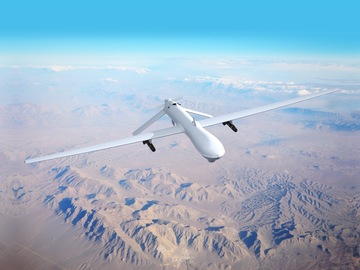 There were two meanings for drone then: a "male bee," or a "monotonous, sustained sound." Which was the inspiration for applying the term?

The aircraft's function can clue you in: it's an extension of the "bee" meaning. Drones are bigger and heavier than worker bees, and they leave the hive and swarm in the fall. They are renowned for a sort of mindless, driven existence: they don't gather honey, they don't defend or maintain the hive, and their only purpose is to impregnate a queen bee.

Using drone for the RPVs emphasized the fact that they had no mind of their own. And no doubt the buzzing flight of an RPV also reminded them of another flying buzzer.

The word "drone" was first used of an unmanned aerial vehicle in 1946, but advances in drone technology in the past few years have made the term much more common. And while they may have no mind of their own, they may soon be connected to yours, as this BBC story about drones that can be controlled by brainwaves shows.