How a Saint Gave Us the Word 'Tawdry'

What’s the first thing that comes to mind when you hear the word tawdry? For some of us, who may be unfamiliar with this word, it is some variant of "where’s my dictionary?" For those who are familiar with it, the most common response will be along the lines of ignoble, gaudy, or salacious. Recent newspaper headlines all seem to use the word in much the same fashion, in connection with things and people which one would generally not wish to sit next to on a crowded subway.

Many Republicans watch in disgust as race turns tawdry
—The Washington Post, 28 Mar., 2016 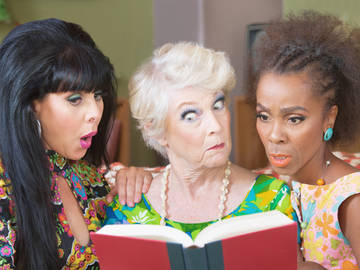 'Tawdry' means "having a cheap and ugly appearance" or "morally low or bad." It's often used to describe something salacious—but it wasn't always that way.

So where might this word come from? Is there perhaps some cutting Old English word for "rumor from a pigsty" that gave birth to tawdry? Or did it come from a Latinate word for some kind of illicit affair? No, not really.

Tawdry comes from a 7th century Northumbrian queen, Etheldreda, who, it must be noted, was not particularly tawdry in her life. She decided at some point that she would abdicate both her position as queen and as a wife, and removed herself to a nunnery on the Isle of Ely (which is not actually an isle, but used to be a city surrounded by swamps).

Etheldreda was said to have been quite saintly in her time as a nun. She died in 679, possibly from a throat tumor; it has been reported that the former queen considered this fatal affliction a judgment levied upon her for having had an inordinate fondness for wearing necklaces as a youth.

After her death Etheldreda’s shrine was frequently visited by religious pilgrims, her name was simplified to “St. Audrey,” and a fair commemorating her began to be held each year on October 17th. Vendors would sell cheap gewgaws at these fairs, including a kind of necklace which was named St. Audrey’s lace.

St. Audrey’s lace eventually became tawdry lace, still in reference to a bit of fabric worn around the throat. By the beginning of the 17th century this had begun to be shortened to tawdry, and shortly thereafter the word tawdry was extended to be used not only the fabric worn round the throat, but also to be used as an adjective to refer to things that were “cheap and gaudy in appearance or quality.”

So that is how a word goes from describing a 7th century nun to being found in the company of other scurrilous bits of vocabulary in lurid 21st century newspaper headlines. If you are of a mind to pay tribute to Etheldreda’s name in one way, you might wear a bit of fabric around your neck this October 17th; if you would like to pay tribute to her name in some other fashion on that date, well, you can just go out and do something tawdry.