The Word History of 'Swag'

A word that has kept adding meanings for centuries

Swag may have Scandinavian roots referring to a bag. It has gone through definitions meaning "a blustering person," "stolen goods," "a bag of stolen goods," "a tote bag with promotional items," "swaggering confidence," "swaying back and forth," and even "one with a swinging belly."

Swag must be ranked among the most gloriously polysemous entries in the catalogue of English words. It may refer to free promotional items, money, loot, bags, an act of swaying, upholstery, self-assurance, and a number of other things. It may function as a noun, as a verb, or as a modifier for a stomach. What is swag, and how can you get some? 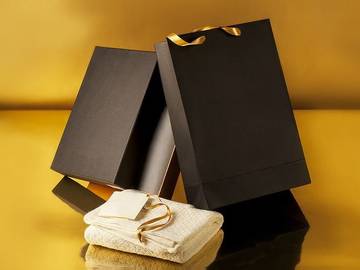 The "bag containing free items" sense came around in the 1960s.

The origin of swag is somewhat unclear, but the word may have Scandinavian roots. There are a number of now-obsolete senses, dating back to the 14th century (the earliest sense recorded in the Oxford English Dictionary is from 1303, and refers to a bag). In the 16th century it began to be used to refer to a blustering person.

A sore labor it is reason that he should bestowe the rest of they care in maintaining his health by recreation and prouiding for his family: giue him leaue but to keepe out the gouernment of the Church to swear like a swag...
— Martin Marprelate (pseudonym), Hay any worke for Cooper, 1589

It is omitted, that Episcopomastix had a fling at the Bishoppe of London for swearing by his faith, wherefore he termeth him a Swag. What he meaneth by that, I will not divine: but as all the rest is lewd, so surely herein he hath a lewde meaning.
— Thomas Cooper, An admonition to the people of England, 1589

In the 18th century swag began to be used to refer to goods acquired by unlawful means, a sense which in the following century was joined with bag, referring to an article in which a thief transports stolen goods.

The Swag is safely planted with the Fence—The Property is taken to the Receiver’s House.
— Irish Magazine (Dublin), July 1815

John Mitchell, a City detective, said he knew the prisoner; he took him and another man into custody for loitering in the City, the prisoner carrying what is termed a “swag bag” under his coat.”
— The Morning Post (London), 17 Jan. 1871

Swag bag does not have much currency as a satchel for stolen goods anymore. For a period in the middle of the 20th century it served as the name of a kind of tote bag; in modern use it typically refers to a bag containing items given away for promotional purposes. The sense of swag meaning “goods given to people who attend or participate in an event” is among the more recent ones, in use only since the early 1960s.

The Shoe Bag carries 4 pairs of Men’s or Ladies’ Shoes. The Swag Bag for those many extra little things.
— The Daily Intelligencer Journal (Lancaster, PA), 25 May 1956

They paid for a buffet that included swag bags and commemorative pins and a piece of “the world’s largest Moon Pie.”
— Eliot Kleinberg, The Palm Beach Post (West Palm Beach, FL), 21 Jul. 2019

An Attitude of Self-Confidence

Even more recent an addition is the meaning "an attitude of swaggering self-confidence,” which appears primarily in African-American usage, and is found in print only since the beginning of the 21st century. This sense of swag is distinct from the ones mentioned previously, although likely from a shared origin; it is a shortened form of swagger (which is itself thought to have come from the earlier swag).

While looking in their closets, they are grappling with ways to "turn their swag on" with the latest fashions often commercialized and sometimes designed by hip hop culture.
— Julius Bailey, International Journal of Africana Studies, Spring 2010

When your twig hut is covered over with oil
tin labels from the USA, you've got some serious
swag, your dreams are the dreams of Texans,
inside no one knows the blues rippling across your forehead,
your interior smells like the beaches of Long Island.
— Major Jackson, Callaloo, Summer 2012

The verbal use of swag dates to the early 16th century, its earliest senses meaning “to sway or lurch” and “to sag or droop.” Shortly after it began functioning as a verb swag found itself compounded with belly and bellied, as a noun for a person with a large protruding belly, or an adjective describing such a person.

Out of these come the swag-belly'd Secretaries, and Purple Chancellors of Emperours and Kings; who govern all affairs of State, dispose of all Favours, Gifts, Benefits, Offices, Dignities and Patents of the prince; who sell all Right and Justice, all Law, Equity and Honesty, and compel others to purchase of them.
—Henry Cornelius Agrippa, The vanity of arts and sciences, 1676

Want they meate? wheres this swag-belly, this greasie kitchinstuffe cooke, call the varlet to me: want meat!
—Thomas Dekker, The shoemakers holiday, 1600

Swag, with its constantly shifting meanings, its adding and losing senses, is a word that well represents the story of English. The nature of any living language is impermanence; words and meanings come and go, and lexicographers typically restrain themselves from picking favorites, or trying to resurrect a word or phrase which has died a natural death. That said, if people started using Thomas Dekker’s lovely phrase greasie kitchinstuffe cooke in numbers sufficient to warrant including kitchinstuffe in future dictionaries it might make some lexicographers very happy.