The History of 'High Jinks'

If you start looking into the history of high jinks, high jinks will ensue.

High jinks, also spelled hi-jinks, is defined in our dictionary as "boisterous or rambunctious carryings-on" or "carefree antics or horseplay," and if it sounds a bit old-fashioned, that's because it is. High jinks was in its heyday in the mid-1900s, though it still sees plenty of use today. 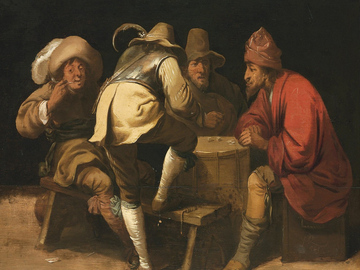 'Hey-jinks' was a dice game in which one person would throw dice and have to complete a task—such as drinking all the liquor in a cup.

The high in high jinks seems to make sense: after all, it can mean "filled with or expressing great joy or excitement." But what about the jinks?

The original jinks in high jinks referred to some sort of dice game. The earliest use we can find in our files is in a 1683 English translation of Erasmus, where it shows up in a vaguely familiar setting:

And as to all those Shooing-horns of drunkenness, the keeping every one his man, the throwing Hey-jinks, the filling of bumpers, the drinking two in a hand, the beginning of Mistresses healths; and then the roaring out of drunken catches, the calling in a Fidler, the leading out every one his Lady to dance, and such like riotous pastimes, ...
—Witt against wisdom, or, A panegyrick upon folly

Hey-jinks was apparently the name of a dice game of chance. It shows up in other writing from the late 1600s as both hey-jinks and high jinks, including in a 1699 dictionary of underworld slang, which gives us a little more information: "Highjinks: A Play at Dice who Drinks." Other sources confirm that high jinks was essentially a game where a person would throw dice and then have to complete a task—such as drinking all the liquor in a cup, or doing something foolish for the amusement of the group—or they'd be in forfeit. In time, high jinks was no longer associated with the dice game, but instead with the antics it inspired.

But where did that jink come from? We're not entirely sure. It may be related to a Scottish verb jink that means "to move quickly or unexpectedly with sudden turns and shifts (as in dodging)," and then later meant "to trick or deceive," though that jink doesn't show up in print until after high jinks does. We do know that it's not related to jinx, however, since that didn't show up in print until the early 1900s, long after high jinks was established.