Helium: This Word Brought to You by a Solar Eclipse 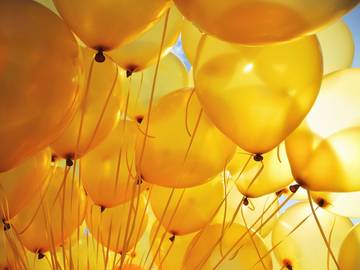 It's surprising to think that an element as basic as helium was unknown until less than two centuries ago.

Most of us encounter helium when levity is called for, like when we're celebrating or trying to make someone feel good: it's what keeps the pretty, floaty balloons floating. But when helium was first observed it was from a great distance and under serious circumstances.

The date was August 18, 1868, and the world had (we can only assume) run out of eclipse glasses. French astronomer Pierre Janssen had been looking forward to the eclipse. He'd traveled all the way to India to observe it. Janssen noticed that day in 1868 that one of the wavelengths being emitted from the gases of the sun's atmosphere was a shade of yellow unlike the known yellows of sodium. Hmm. How mysterious, (we assume) he thought. (We also think that the mysteriousness of what Janssen saw is amplified by the fact that it's more properly described as a spectral line: one of a series of linear images formed by a spectrograph or similar instrument and corresponding to a narrow portion of the spectrum of the radiation emitted or absorbed by a particular source.)

Later that same year an English astronomer named Joseph Lockyer observed the same yellow spectral line that Janssen had seen, and concluded that the line was caused by an element in the Sun. He and a compatriot, chemist Edward Frankland, dubbed the element helium, from the Greek word for "sun," hēlios. Almost thirty years later, in 1895, British chemist William Ramsay discovered helium on Earth. (Ramsay is also the guy who discovered neon, argon, krypton, and xenon, and showed that those gases, along with helium and radon, formed the noble gases.)

It's surprising to think that an element as basic as helium was unknown until less than two centuries ago. After all, its two protons mean an atomic number of 2 and the number 2 position in the Periodic Table (as you can see here in the Periodic Table). The element is also abundant, universally speaking anyway. The only more common element in the universe is hydrogen, numero uno on the PT, and more than three times as abundant. Though found on earth, the first place helium was spotted is still where it is most at home. Helium is found mostly in stars.